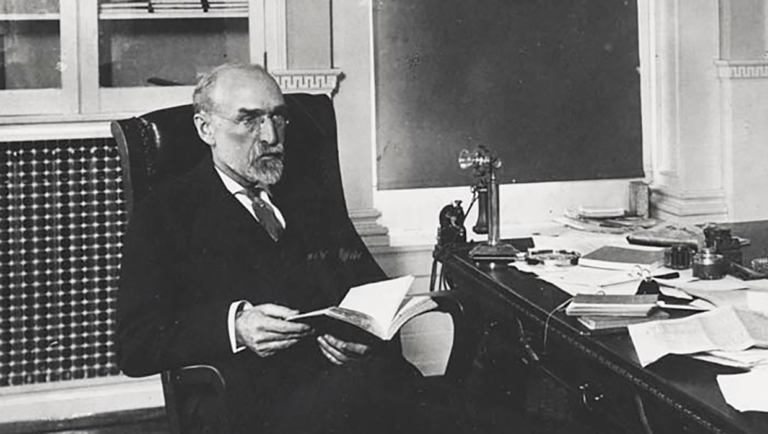 The Wisconsin Idea began as the principle that knowledge and education should be used to ensure that the people of the State could retain and exercise power in their government and economy. This vision, shared by the State and the University, led to Wisconsin’s rise to fame in the early 1900s.

The Wisconsin Idea emerged from a set of influential personal relationships based on trust and shared values. Charles Van Hise and Bob La Follette met at UW as undergraduates and were deeply influenced by President John Bascom’s belief that the University’s service to the State was a moral obligation. Frederick Jackson Turner, also influenced by Bascom as an undergraduate, later became the teacher of Charles McCarthy, who wrote the 1912 book The Wisconsin Idea that gave the vision a name.

As these founders of the Wisconsin Idea went on to gain positional power in the State and University, they recognized and were motivated by the immediate threats to the democracy and economy at the time—the diminishment of resources inside the State and the consolidation of wealth outside of it. At that key moment in history, they remained committed to the vision, and employed the necessary resources to realize it.

Early examples of the University working with citizens to address public issues included providing technical assistance to the dairy industry to increase production and ensure fairness in commerce, University experts working with the Legislative Reference Bureau to share knowledge with State government, and creating University Extension to share practical knowledge and education around the state.

The transfer of knowledge and information was valuable as a tool that citizens could use to make their own decisions and govern themselves most effectively. But information alone was not enough; the Wisconsin Idea was built on the notion that broad and deep social connections make democracy stronger. Other social movements and universities approached their service mission as “noblesse oblige,” while at Wisconsin, the guiding vision was expressly egalitarian and democratic.

The history of the emergence of the Wisconsin Idea offers a set of values—self-governance, integrity, egalitarianism, truth and interpersonal trust—that can guide the University’s contemporary approach to engaging with public issues.

Read more in Gwen Drury’s essay, “The Wisconsin Idea: The Vision that Made Wisconsin Famous”

Wisconsin’s Great Idea, Madison Magazine 2011 which includes a section where notable alumni, were asked, “What does the Wisconsin Idea mean to you?”

Our view, Perspectives from the Public: How Wisconsinites View UW-Madison. (30 minutes) in which Katherine Cramer-Walsh, PhD, shares the results of her study, which examined people’s perceptions from around the state about the UW-Madison. She discusses outreach and important considerations in establishing research partnerships in communities around the state in the video.

From the WI Idea Forum for Engagement Practitioners and Advocates

In a Wisconsin Idea world, how would I behave? Report of Responses to Questions 1 and 2

If we, at UW-Madison, were to be ten times bolder about living the Wisconsin Idea, what could we do? Report of Responses to Question 3

How can we put our bold thinking into action? Report of Responses to Question 4