BadgersVote is a campus-wide initiative that strives to provide University of Wisconsin–Madison students with everything they need to know in order to participate in their elections. The BadgersVote Coalition is comprised of many individuals, units and departments across campus and the city of Madison.

On Election Day, polls are open from 7am to 8pm.

A detailed guide of Wisconsin student voter information can be found at vote.wisc.edu.

Are you more interested in voting in your home state? Visit Project Vote Smart to find dates of elections in other states.

You can create your personalized plan to register and vote through the BadgersVote interactive voting tool at go.wisc.edu/StepsToVoteUW.

Join us for our bi-weekly meetings which will commence in Fall 2022 as we reconvene for next semester. Our fall meeting times will be added to the Morgridge Center events page as they are scheduled.

For more information on how to get involved, contact Shelby Fosco: sfosco@wisc.edu

This includes providing Badgers with a continuously updated comprehensive voting resource at vote.wisc.edu.

We need to continuously be working to empower our campus and partner with our greater Madison community, to make their voice heard and prepare to get out the vote for the next election. Check out our Democracy Never Sleeps resource focused on how to make your voice heard, engaging your peers, and participate in student advocacy.

The Morgridge Center collaborates with several campus, local and national initiatives to support other student voting efforts. See links below for more information on these initiatives.

ALL IN Democracy Challenge and Voter Friendly Campus Report

The University of Wisconsin-Madison has joined more than 575 other colleges and universities around the country by committing to the ALL IN Campus Democracy Challenge.

By recognizing colleges and universities for their commitment to increasing student voting rates, this national awards program encourages institutions to help students form the habits of active and informed citizenship. Hundreds of colleges and universities have joined the Challenge and have committed to making democratic participation a core value on their campuses. Together, they are cultivating generations of engaged citizens who are essential to a healthy democracy.

Additionally, the University of Wisconsin–Madison is one of over two hundred campuses in thirty-seven states and the District of Columbia designated as a “Voter Friendly Campus.” The initiative, led by national nonpartisan organizations Fair Elections Center’s Campus Vote Project (CVP) and Student Affairs Administrators in Higher Education (NASPA), held participating institutions accountable for planning and implementing practices that encourage their students to register and vote in 2020 elections and in the coming years. The designation is valid through December 2022.

The BadgersVote team is a group of dedicated and passionate student interns working to mobilize and educate students about the importance of voting at the University of Wisconsin–Madison.

Beginning in the spring of 2016, UW–Madison began its intern program by hosting three Vote Everywhere Ambassadors funded by the Andrew Goodman Foundation. Vote Everywhere is a national, non-partisan, civic engagement movement of student leaders and university partners honoring Andrew Goodman, a former UW student, voting rights activist and freedom rider who was killed along with civil rights workers James Earl Chaney and Michael “Mickey” Schwerner by Klansmen in 1964. The program provides extensive training, resources, as well as a peer network to support its Ambassadors while they work to register voters, bring down voting barriers, and tackle important social justice issues.

Since then, BadgersVote has added interns from the Campus Vote Project, the League of Women Voters Dane County, and Campus Elections Engagement Project to work with faculty and staff on addressing barriers to student voting on campus. As a subset of the Badgers Vote Coalition, these student interns lead efforts to excite students about voting on campus and lead in critical efforts to increase access to voter ID, connect the student vote to issues occurring within society and deepen students’ capacity to invest in the upholding of democracy.

READ LETTER FROM THE PRESIDENTS

One of the most important values we teach at our universities is the importance of civic engagement. Voting in elections gives students a voice in the democratic process and in the decisions that affect local, state, and national issues. The Big Ten Voting Challenge is a nonpartisan initiative to encourage students to exercise their right to vote, which is among the most fundamental opportunities to be an active and engaged citizen.

UW-MADISON COMMITS TO EMPOWERING STUDENTS TO VOTE in 2020

UW–Madison participated in the Big 10 Voting Challenge for the 2020 presidential election. Many students had cast their votes early amid the pandemic, and the presidential election is expected to have high turnout. Dane County smashed records for voter turnout on the historic day.

University of Wisconsin–Madison students achieved the second-highest voter turnout among the 14 member institutions of the Big Ten Conference in the 2018 midterm elections, according to the newly announced results of the Big Ten Voting Challenge.

A national survey found student turnout at UW–Madison increased by nearly 18 percentage points in the 2018 midterm elections compared to 2014.

The National Study of Learning, Voting, and Engagement (NSLVE) offers colleges and universities an opportunity to learn their student registration and voting rates. UW–Madison has joined more than 1,000 campuses across all 50 states in participating in NSLVE. This study is the first and only to objectively examine student and institution-level data on student voting and share these data with participating campuses.

The origins of the BadgersVote Coalition stretch back to 2013. The Morgridge Center began emphasizing the importance of voting after the arrival of Kathy Cramer as the new faculty director.

With Kathy as a driving force of civic engagement programming, the next step toward the BadgersVote Coalition’s creation was the university’s participation in the ALL IN Campus Democracy Challenge in 2016. UW–Madison joined 575 higher education institutions across the nation to promote student voter engagement.

Building off ALL IN’s momentum, the Andrew Goodman Foundation joined the ranks of the Morgridge Center partners in 2016, placing paid student interns in positions on campus to increase voter engagement and civic awareness.

Chancellor Rebecca Blank signed on to the challenge and appointed Kathy to lead the university’s efforts. Kathy created an advisory board, known as the Big 10 Voting Challenge Committee, to help determine initiatives with funds allocated to the challenge.

As the 2018 midterm elections rolled around, the Big 10 Voting Challenge Committee became the infrastructure of BadgersVote by bringing independent operators together to create cohesive messages. The committee worked to streamline all student voter information to vote.wisc.edu.

Launching off the energy from the Big 10 Voting Challenge, the BadgersVote Coalition officially formed as a permanent structure of the organization following the 2018 midterms.

Since its founding, BadgersVote has accumulated more funding for voting initiatives and increased the number of students involved in civic engagement on campus. The BadgersVote Student Coalition consists of interns housed in the Morgridge Center who work for a variety of organizations, including the Andrew Goodman Foundation, the League of Women Voters, Campus Election Engagement Project  (CEEP) and several other community partnerships.

In addition to heightened student involvement, the breadth of the people involved has increased exponentially to include community members without university affiliation, including the City Clerk’s Office.

BadgersVote promoted its efforts throughout the pandemic and the 2020 election, and the coalition will continue to remain true to its original mission, which is, in the words of Kathy, to “make sure students have all the information they need in order to vote and to also promote a very strong belief in democracy and the importance of students having their voices heard.” 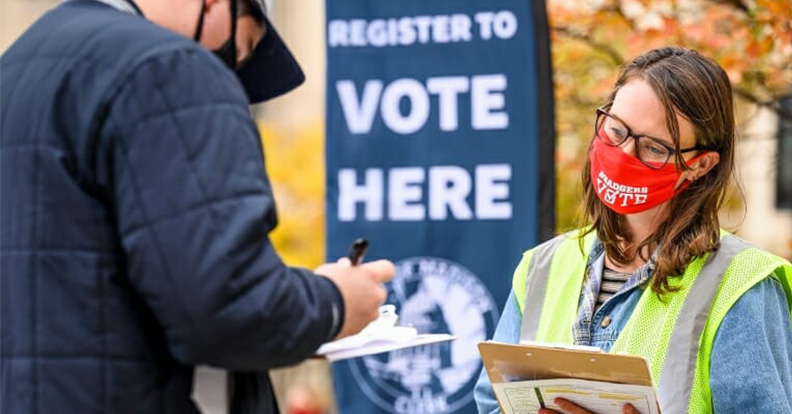 National Voter Registration Day was first celebrated in 2012 with the goal of helping all eligible citizens in registering to vote in celebration of democracy. Since 2012, almost 4.5 million voters have registered on this annual holiday, including 1.5 million in 2020. Learn about how and why you should register to vote! 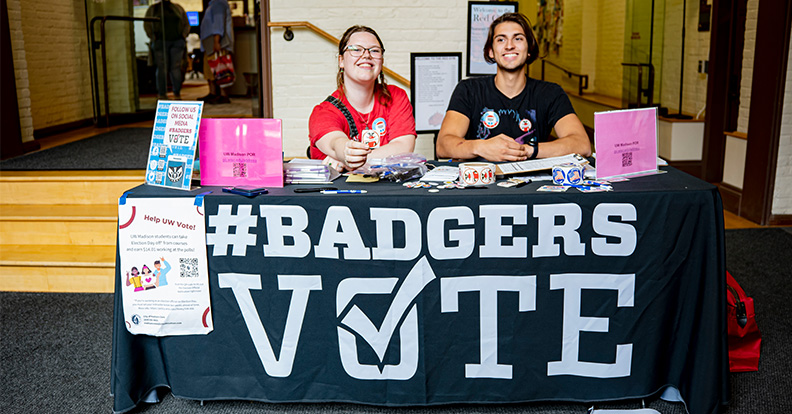 In celebration of National Voter Education Week, the Morgridge Center for Public Service and the BadgersVote Coalition took to the street to ask Badgers why they vote. Hear what students had to say about upholding democracy and encouraging young people to engage in voting. 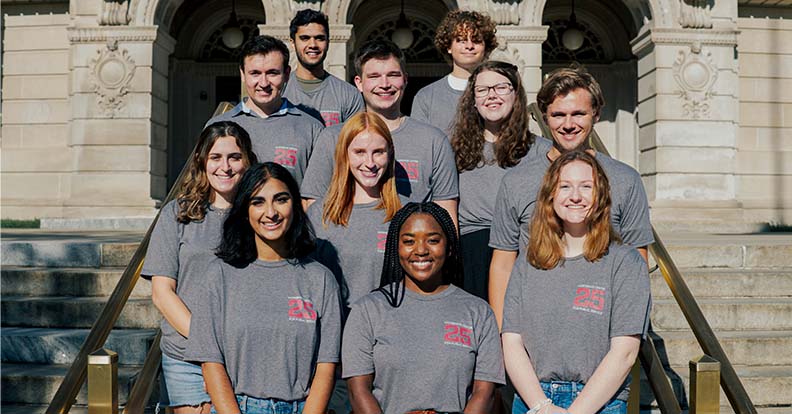 The ALL IN Campus Democracy Challenge recognized UW–Madison with several awards for student voting in the 2020 presidential election. ALL IN honored UW–Madison for having the highest student voter registration and voter turnout among four-year colleges in Wisconsin as well as the most improved voter turnout. 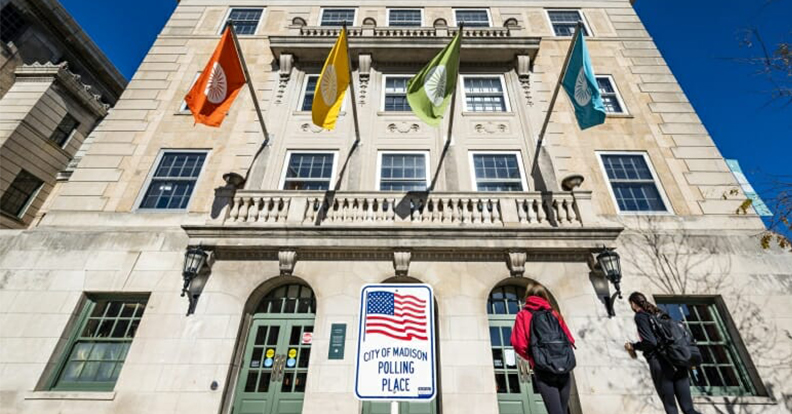 Make a Plan to Vote

Students and employees who are eligible voters can choose one of three ways to cast their ballots in the Nov. 8 general election: absentee by mail, absentee in-person at one of three sites on campus, or live at the polls on election day. Make a plan and remember, #BadgersVote. 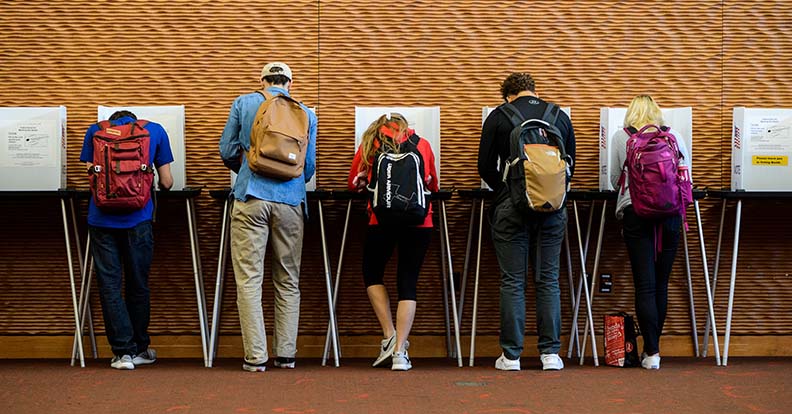 Student Voting Up From 2016

University of Wisconsin–Madison student voter turnout increased 7.4 percentage points in last year’s presidential election, rising to 72.8 percent in 2020 from a rate of 65.4 percent in 2016.
Our rate was higher than the 66 percent voting rate of all colleges and universities, according to NSLVE. 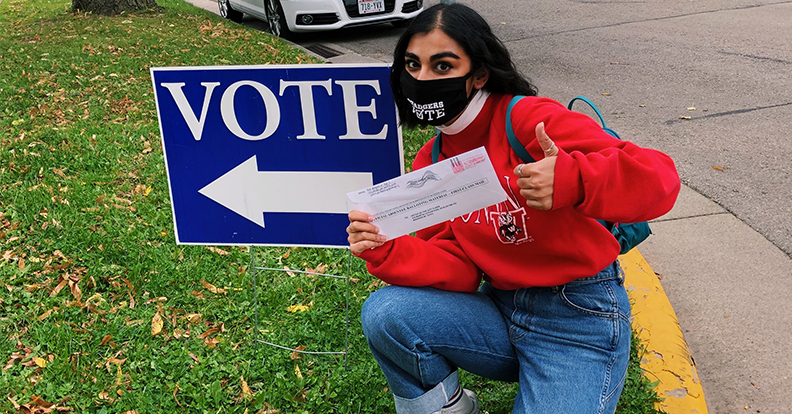 Getting out the Vote

Every Thursday at 6 p.m. before the 2020 election, UW students banded together to tackle a nationwide challenge: getting out the youth vote. Read more about the BadgersVote Student Coalition's extraordinary efforts to get out the student vote in amid the pandemic in 2020.