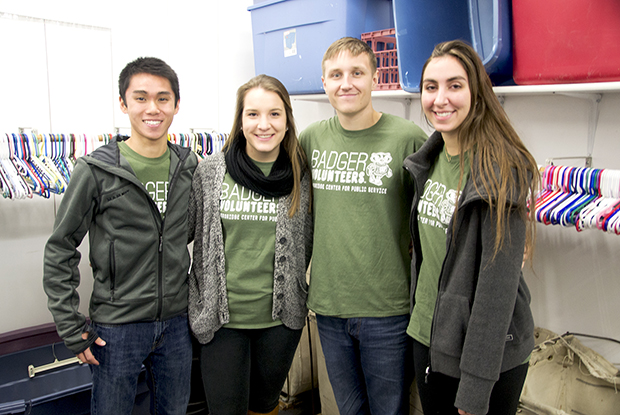 “My experience at Community Action Coalition changed my views on everything,” said Halle Wisniewski, reflecting on her first semester as a Badger Volunteers team leader. “Everyone who walks in through that door has a different story.”

At the Community Action Coalition, Halle, a UW-Madison junior studying nursing— and the team’s three other volunteers Joe, Chris, and Olivia— assist with sorting and distributing clothing donations to community members who come in need of, particularly, business and winter attire.

But the team’s volunteer experience this semester has stretched far beyond a few hours each week sorting clothing on Madison’s north side.

It all started with a Facebook post, when Halle asked her friends to sign up for her Badger Volunteers team early in the fall so the team have enough people to volunteer this semester.

One of Halle’s neighbors from her hometown commented, acknowledging that she was too old to work with the team, but said she “would love to get something going.”

Halle told her about the Koats for Kids drive the Coalition holds every fall, and from there the effort took off. Her neighbor’s husband, who works for a regional realty company, sent out an email statewide asking for donations of clothing, especially winter attire. Halle also recruited family members to ask friends and around their workplaces, senior homes and other communities.

What resulted was a visit one morning while the team was volunteering. It was a few of Halle’s neighbors and over 100 winter coats that had been collected.

Doing the hands-on work at the CAC made the effort that much more meaningful and important to Halle.

“The people who walk in through that door – that could be the highlight of their week, getting a new coat.”

The team typically worked alongside older adult volunteers, making the weekly experience enjoyable and interesting even on slow days.

“We look forward to going there every week to hear how their week was and they like hearing what we did,” said Halle.

Joe, a philosophy major, could often be found having long conversations about philosophy with one of the volunteers. And Chris, a biomedical engineering major, made a connection with an older volunteer who has sleep apnea, bringing her into his current project with a machine meant to help ease the symptoms of sleep apnea. Other volunteers commented on how hard the Badger Volunteers team worked and how dedicated they were to even remedial tasks at the CAC.

For Halle, it’s a genuinely enjoyable experience, and says “it’s awesome to build relationships with people outside of the university.”

Bonding over their mutual experience in community service has helped the students feel more integrated with their campus community as well.

No one on the team knew each other before signing up at the beginning of the semester, but that’s hard to believe when you spend time with them. Before heading off to volunteering many weeks, the team would meet up to grab breakfast together from Greenbush Bakery. The students joke freely with each other and talk about school and life, keeping in touch and hanging out when not volunteering. They even formed a dodgeball team for a campus tournament.

“Olivia is from New York and she’s a freshman, so she just wanted to get involved and chose this organization,” said Halle. “And now we’re just kind of her home away from home, like her family.” The volunteers hope to work on the same Badger Volunteers team again next semester.

Halle attributes the drive to serve her communities to her upbringing, which involved her parents reminding her often, “we are very fortunate to have what we have, and you need to realize not everyone has that.” The team leader says she often hears their words in the back of her mind while she is volunteering and this motivates her to remain focused on the work at hand and the difference she is making.

Halle, Chris, Joe and Olivia have all told the staff at the CAC that they will come back on their own time to help out whenever possible. Halle also has plans in mind to collect even more clothing donations for the drive next fall.

So although the semester’s work has come to an end, the community connections made are lasting. And, of course, there’s still a team breakfast on the schedule this week.

The Badger Volunteers sustainability program is supported generously through our partners, UW-Madison Facilities Planning & Management and WE CONSERVE.