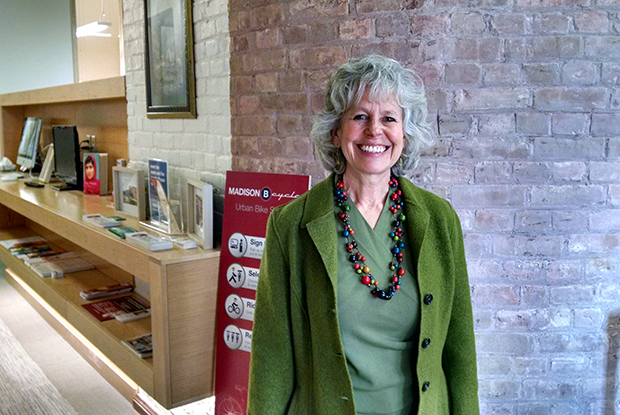 The award recognizes outstanding faculty or staff members at Wisconsin colleges and universities who have made significant contributions to civic engagement on their campus.

Ledin, who serves as the Outreach Director at WISCIENCE, was honored for her over 25 years of science outreach and community-based learning work impacting students at UW-Madison and K-12 students in Madison and across the world.

In 1991, with the Madison Downtown Kiwanis, Ledin launched ARMS (Adult Role Models in Science) with the mission of enhancing science education opportunities for elementary age children with a special emphasis on meeting the needs of children in poverty.

Today, ARMS engages over 70 UW-Madison undergraduates and community members every semester as volunteers in ongoing science experiences at over 40 area schools and community centers impacting 600 Madison children every year.

“She has been a tireless champion for engaging members of the campus community in science outreach in the community,” Morgridge Center for Public Service Director Kathy Cramer said.

Ledin says that ARMS has been built to be both a part of community and a part of the university.

“I feel just as much a part of them as I feel a part of the university,” Ledin said. “I’m just connecting to where I live and the community I’m part of.”

Cramer said several years ago she had the opportunity to talk with students in Ledin’s course.

“Within minutes it was clear that Dolly had changed their lives,” Cramer said. “Dolly has created new worlds of possibility for youth beyond campus, but she has also done that for our undergrads.”

Within recent years, Ledin helped launch the Young Science Scholars program, which aims to connect area teachers and afterschool leaders with trained ARMS volunteers, scientists and retired expert science teachers. The project, sponsored in part with a grant from the Morgridge Center for Public Service, has become a national model for science education professional development.

Ledin says ARMS is a bridge that can benefit both UW-Madison and the community.

“There’s so much that can be accomplished by building that bridge,” Ledin said. “Because there are extensive resources on both sides of the bridge.”

Ledin also directed the formation of COMETS (Creating Opportunities in Math, Engineering, Technology and Science), a partnership between six community centers, Edgewood College and the ARMS program, which has successfully brought STEM into the live of local youth for decades.

Paul Terranova works with Dolly Ledin through the COMETS program as Executive Director of the Lussier Community Education Center. He says Ledin has gone out of her way to work hand-in-hand with people beyond campus, enabling the community center to do work they otherwise would not have been able to do.

“We knew COMETS was going to be a success when kids started coming into the building on Fridays saying, ‘Oh yeah! It’s COMETS day!’” Terranova said.

Ledin will be honored for her service to higher education and the community at the Wisconsin Campus Compact Annual Civic Engagement Institute on March 26 at the Pyle Center on the UW-Madison campus.

The Wisconsin Campus Compact is a coalition of 30 public and private institutions of higher education in the state with the mission of strengthening civic engagement and service-learning partnerships across the institutions and the communities they serve. WCC is a member of the national Campus Compact, which encompasses nearly 1,200 colleges and universities, serving six million students.