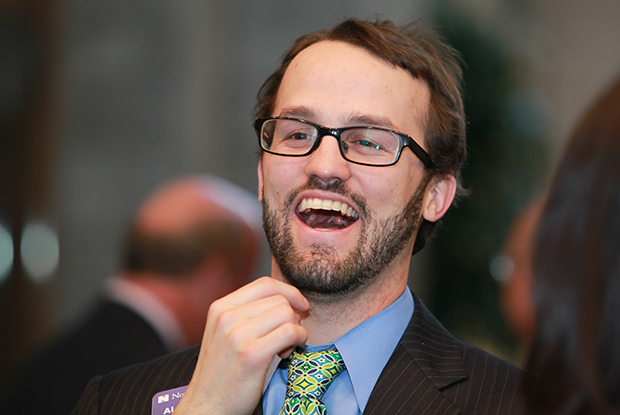 “I feel like the Morgridge Center is the place to get excited about giving back.”

Alan Paberzs’ first significant brush with public service and social justice at UW-Madison was during his sophomore year on an Alternative Spring Break trip in 2001. Ever since that week spent repairing hurricane-damaged homes, he’s really never stopped living a service-minded mission.

Ten years removed from his time on campus, Alan has built a career inspired by the Wisconsin Idea and guided by his time spent with the Morgridge Center for Public Service.

“I didn’t want my college experience to be limited to the classroom,” Alan says today. “I really wanted to feel involved and connected to the community, especially locally in Madison.”

As a junior, Alan was hired as a service-learning fellow at the Morgridge Center. He provided support for faculty teaching and for the students enrolled in service-learning courses across campus.

“And Kathy is one of those professors who you never forget,” Alan says. “She just was a very powerful influence in my undergraduate career, more by helping to connect the dots and making me know I really wanted experiential education to be part of my career.”

Today, Alan says the Morgridge Center allowed him to develop a “service-based identity.”

“When I was looking for my first job out of school, the two things that I was looking for that were consistent with my sort of personal values that I needed to find at my first job were an organization that’s committed to doing social justice and that practices experiential education in some way,” Alan says.

Armed with a bachelor’s degree in social welfare from the School of Social Work and a master’s in public policy analysis from the La Follette School, Alan set off from Madison in 2005 in search of just such a job.

And it was Bucky who gave him a big break.

“I found out about the job through a connection: my best friend, who was a Bucky. His dad was a lawyer in Chicago, and he offered to pass my resume on.”

Alan’s resume landed on the desk of the dean of Northwestern University’s School of Law in Chicago. He was surprised when, two weeks later, he received a call about a position as director of financial operations at the Bluhm Legal Clinic at Northwestern.

The clinic helps to train skilled, ethical, and reform-minded lawyers while also providing legal services to underserved and underrepresented populations. Alan took the job, and, for seven years, it allowed him to use the skills he learned at UW-Madison while also living out his values.

“And then seven years out, there was a new dean,” Alan says. “And the new dean said the clinic has always done terrific work, but they don’t do a very good job of getting the word out about its amazing work.”

So Alan was hired in the new position of director of development to be a sort of alumni ambassador to work with alumni and donors to let them know what’s going on with the clinic — a role he’s held now for three years.

“So it’s the perfect kind of manifestation of the Wisconsin Idea,” Alan says. “The boundaries of the classroom here are clearly not limited. The campus community in Chicago extends across the country, across the world. I’m just proud to be part of that.”

And Alan continues to give back beyond his hours at the office, serving on a number of nonprofit boards and as chair of the Wisconsin Alumni Association: Chicago Chapter from 2011 to 2013.

That’s all part of Alan’s passion for public service and the Wisconsin Idea that has only grown stronger beyond the campus borders as a UW-Madison alumnus.