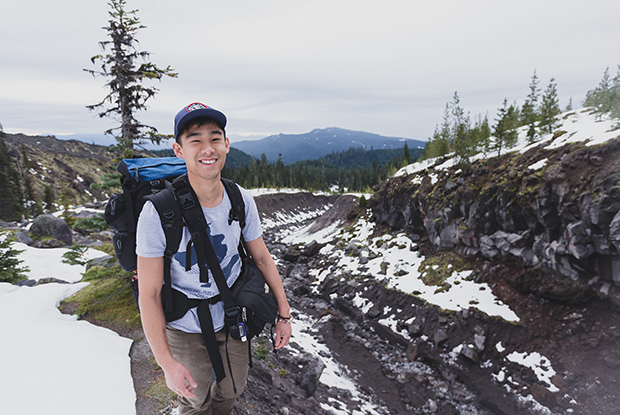 One of eight undergraduate Wisconsin Idea Fellows at the Morgridge Center for Public Service this year, Loo is wrapping up the latest stage in his multi-year community-based study on water quality and access in rural South Africa.

And when he’s not on the ground in South Africa, you can find him back in Madison hard at work developing a potentially revolutionary approach to HIV diagnostic testing —one that would cost perhaps just 1% of current tests.

Loo, humble in sharing credit at every step, says his persistence comes from his passion for the work.

“I truly enjoy research,” Loo says. “It would definitely be a chore to go into lab or write grants and papers if I did not enjoy my workplace and research subject.”

When Loo took the class, his assessment group paired with Dr. Michael Bell, director of the Center for Integrated Agricultural Systems, studying waterborne disease and land use in the eastern rural South Africa village of KuManzimdaka.

But when the class ended, Loo didn’t feel like his work was done.

“There were definitely long-term opportunities that transcended the class,” Loo said. “It kind of seemed like a shame that we had put a whole semester into doing this project, and I knew we hadn’t really produced a solution to the problem.”

Loo’s friend and 2014-15 Wisconsin Idea Fellow Kayla Sippl suggested he should apply for the fellowship. He did, partnering with Dr. Bell as his faculty mentor and South Africa-based Indwe Trust NPC as his community partner. His waterborne disease community-based research project was accepted as one of six 2015-16 Wisconsin Idea Fellowship projects.

But Loo knew to be successful, his project needed strong community input.

Recognizing what you don’t know

Valerie Stull, a PhD student in the Nelson Institute and a teaching assistant for Dr. Patz’s health impact assessment course, says Loo’s humble approach to community-based research has been critical to the project.

“One of the weaknesses I see in many undergraduates is the inability to recognize what they don’t know,” said Stull. “Theo recognized what he didn’t know right away, and he took special care to consult the appropriate people before his research trip.”

And when Loo landed in South Africa last summer, he took special care to talk with everyone. Literally.

KuManzimdaka’s residents face health issues directly tied to decades of apartheid in South Africa. Loo says the community was pushed into the foothills of a rocky mountain range that’s not conducive to livestock management or grazing or farming. And their water sources are springs contaminated by animal waste that are often kilometers away.

Some people walk up to six hours to collect water.

In addition to community dialogues, Loo performed water quality tests (confirming that the water was, in fact, badly contaminated) and conducted extensive mapping that helped identify infrastructure and terrain. The data and experiences he gathered told him the village needed a serious long-term solution. But Loo said it didn’t feel right to abandon the village with just a data set and a few distant solutions.

“Yeah, it would be hard to go,” said Loo. “I feel so morally conflicted and wrong if I went to the community and said, ‘You have this problem. You have this water issue problem. We’re going to give this data to the South African government and just kind of leave.’”

So with his partners in South Africa, Loo is proposing a series of “water plazas” that will help collect and store rain water within the community for the near term. Acrowdfunding campaign has been established for the project.

“We’re hoping that can mitigate the situation until they have a more permanent solution,” said Loo. “I think I have a big responsibility in that. I think I have to help them out somehow until the longer-term issue gets resolved.”

Two years ago, Loo and his friend Nico set off on a road trip from Madison for Colorado. “We were stuck in the car together for 14 hours. We needed to make it productive.”

By the time they reached the Rockies, the pair had developed a rough idea to revolutionize HIV diagnostic testing. “We just kind of played in back and forth until we had something tangible.”

When they returned to Madison, the pair approached Dr. David Beebe and Dr. Scott Berry at the Wisconsin Institutes for Medical Research, who funded the idea with seed money.

Here’s the issue: Patients with HIV need regular testing to determine the amount of the virus in their blood. A sudden increase in virus loads can indicate that the patient needs a change in treatment. But according to Loo, only 25 percent of patients living in low-resource settings have access to the test, which usually cost $24-44 per test. On top of that, the test requires complex equipment that can cost hundreds of thousands of dollars, involves intensive training and requires steady electricity.

“It’s just as good as the other ones,” said Loo. “And it’s also really rapid. So fast, cheap, reliable and accurate.”

So how does it work?

“The chemicals you use for HIV diagnostic testing are really expensive,” Loo said. “We’re cutting down the re-agents and the materials used by 95 percent. So it’s nano-scale.”

“It’s certainly exciting that no one is looking at the approaches that we’re looking at.”

A cheaper test, along with a cheaper and simplified quantification device in development, could very likely mean better HIV treatment for potentially millions around the world. And that’s exactly what Loo has in mind.

“It’s a novel mechanism. So we’re going to try to patent that and try to bring this product widespread throughout the world.”

“The main takeaway for me was not a business card, funding, or tidbit of knowledge, but the urge to do more,” said Loo of the event. “It inspired me to further my research and apply my skills to improve global health.”

The very best sense of the Wisconsin Idea

Loo is heading back to northern California for a longer stay in the fall—he’ll be attending graduate school at the University of California-Berkeley where he plans to continue his work. In fact, he wants to combine his water quality work with the HIV diagnostic research.

“I didn’t want to just be there for a few weeks, leave and never see them again,” said Loo of his time in South Africa. “I wanted to make it into a long-term project.”

Loo knows it’s ambitious, but he hopes his water project can establish a replicable blueprint for water quality and access solutions across all of rural South Africa—covering nearly 20 million people.

Theo Loo’s unintimidated, humble persistence to fight some of the world’s most pressing challenges is both inspiring and motivating.

“He just has such a passion for really doing something good,” said Dr. Bell. “Really the very best sense of the Wisconsin idea.”