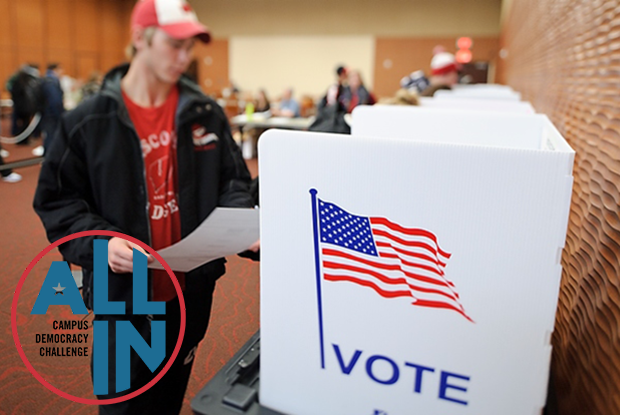 The University of Wisconsin-Madison has joined more than 170 other colleges and universities around the country by committing to the ALL IN Campus Democracy Challenge.

In short, the challenge is to get more students involved in their democracy. In late July, Chancellor Rebecca Blank officially accepted that challenge.

“UW-Madison has a long and proud tradition of active, democratic engagement,” said Kathy Cramer, Morgridge Center for Public Service Director and professor of political science. “Participating in this challenge reaffirms our commitments to ensuring that a college education helps prepare people for great citizenship.”

Though launched amidst a presidential campaign, the Challenge is not a short-term initiative. But the upcoming election has offered college campuses, including UW-Madison, the opportunity to take a closer look at student civic engagement and voting.

According to the National Study of Learning, Voting and Engagement, 53% of eligible UW-Madison students voted in the last presidential election, in 2012. This puts UW-Madison well ahead of the national student voter average of 46.9%.

And UW-Madison students aren’t just interested in the presidential elections. In the 2014 midterm elections, 35.5% of UW students voted, nearly double the national average of 18.8%.

“UW-Madison students are leaders in caring about the world around them, and the turnout rates are one example of that,” said Cramer. “The Morgridge Center for Public Service is very proud to help this tradition thrive.”

But Cramer and other campus leaders believe even more can be done. As part of the Challenge, UW-Madison was required to draft an action plan that included initiatives, events and commitments to increasing student voting and civic engagement.

The Morgridge Center and Professor Cramer led the efforts to compile an action plan.

UW-Madison’s action plan identifies 20 specific initiatives that are either ongoing or have been developed specifically ahead of the upcoming presidential election. Though certainly many dozens (if not hundreds) of additional efforts are underway across campus. Highlights include:

You can see the complete Action Plan here.

Following Election Day in November, the ALL IN Campus Democracy Challenge will collect data from participating schools and then dole out awards based on student voter participation. One school among the highest participating will be named the champion of the challenge.