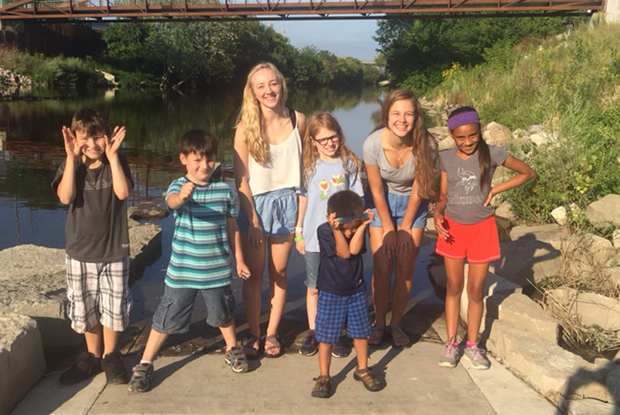 Having grown up and attended school together in the Milwaukee metropolitan area, UW-Madison sophomores Katie Piel and Natalie Hogan were well aware of food security issues throughout the city, but it wasn’t until college they started to learn how they could address the problems.

Last spring, Piel, an Environmental Studies and Communication Arts double-major, was taking notes in a lecture on food system sustainability taught by Professor Cathy Middlecamp when she realized she could take her notes beyond the classroom. At the time, she was brainstorming ideas for an application to the Wisconsin Open Education Community Fellowship program along with Hogan, a Dietetics and Spanish major.

“Immediately, [Professor Middlecamp] kind of inspired me, and I approached her and asked if she would mentor and advise us on this project,” said Piel. Middlecamp, an expert in the teaching and learning of real-world science issues, including sustainability, agreed.

The summer fellowship program, which is co-sponsored by the Morgridge Center for Public Service and the Division for Continuing Studies and Educational Innovation, provides grants to a select number of student projects that serve Wisconsin communities under the guidance of a Massive Open Online Course, a faculty mentor and a community partner.

The students already knew the open online course “Climate Change Policy and Public Health” aligned most closely with their interests and expertise of their mentor, and their choice of community partner came easily.

“Once we thought of the Urban Ecology Center, we realized it really fit because they’re already well-established,” said Piel of the Milwaukee-based environmental organization. “We knew we would have an audience receptive to our project and we could still take it one step further to make a difference.”

“The Morgridge Center really stressed working alongside your community partner and looking at what they already had,” said Hogan, reflecting on the initial development of the project. “We didn’t want to change the course we were doing but wanted to supplement the activities they were already doing with education on the topics we had in our proposal.”

Piel and Hogan decided to develop an educational component to the Young Scientists’ Club, an affordable, drop-in community program at the organization’s Washington Park and Menomonee Valley locations in Milwaukee.

Hogan herself participated in programs at the Urban Ecology Center when she was a child, so she understood the importance of the club to local children and families. “The impression we got is that in a lot of ways the Young Scientists’ Club kind of acts as a safe space. The kids can go there after school when their parents aren’t home from work, can do some gardening and play some fun activities,” said Hogan.

They never knew how many or which children would show up each week for their activities. But Piel and Hogan knew translating their interests and online coursework into teaching the concepts of climate change and local, sustainable and healthy eating would be challenging but critically important to children in an area “that is primarily a food desert.”

Piel and Hogan’s plan was to develop relevant lesson plans for the Young Scientists’ Club by simplifying and teaching the concept of climate change through interactive, enjoyable activities in gardening, local and sustainable agriculture, and healthy cooking and eating.

Within the first week of their program, Piel and Hogan began to notice where real changes were possible— especially in the case of Victorio, a “very hyper” eight-year-old boy who participates in the club at its Menomonee Valley location.

“We visited the garden for the first time, and the radishes were the only thing ready to harvest at that point, because radishes are a quick-developing plant, so we asked [the club] to find the radishes,” said Piel.

She said Victorio was the first to find the radishes and was excited until he found out they would be eating the vegetables they picked.

Hogan said this was only the first of many times they saw club participants changing their minds about the fruits and vegetables grown in the Urban Ecology Center gardens.

“When they’re the ones who are chopping it, preparing it, and putting it together, they automatically want to eat it and automatically love it,” said Hogan. “And that’s kind of the idea that we want to instill, is that not only is healthy eating better for you, but can also be just as fun and just as delicious as going and buying a fast food meal.”

When the summer ended, Piel and Hogan left their entire curriculum with the Urban Ecology Center in hopes that future programming can draw from their work in sustainable agriculture, healthy and local eating, and even climate change.

Students will also continue to enjoy fresh produce through mid-October thanks to CSA box donations from Living Off the Fat of the Land in Elkhorn, Wis.

The students capped off their summer fellowship with a “slow food-style” dinner prepared by the children in the Young Scientists’ Club for their parents. “We could have a conversation among us about how the kids grew the food over the summer and the majority of the food in the gardens right outside,” Piel said.

The dinner was inspired by some of the conversations Piel and Hogan had with parents during or after the weekly programming about how to bring their healthy eating, cooking, and gardening activities home.

“It’s in certain ways more important to make an impact on the parent, because they’re the ones who are buying the food, preparing the food, teaching values to their kids about eating and how to eat sitting down at the table, family dinners, that kind of thing,” said Hogan.

“It makes me feel like we’re creating a much wider impact than we had originally intended.”