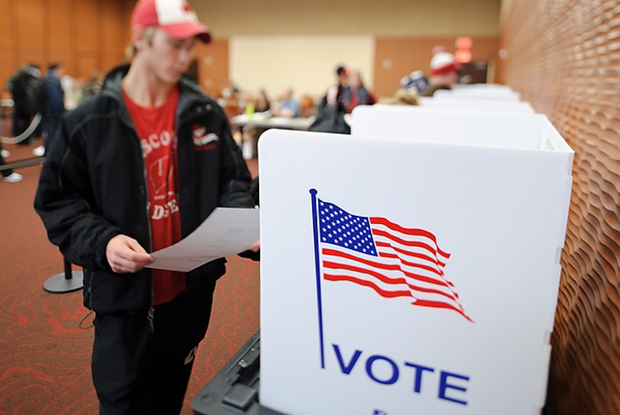 Millions of Americans are witnessing one of the most historic presidential elections of their lifetime, the first opportunity to engage with the democratic process for many.

And three UW-Madison students have spent the past year focusing their efforts on ensuring the right to vote extends to all citizens. Sophomores Sally Rohrer, Kara Bell, and Alex Kulstad are campus vote ambassadors for the Andrew Goodman Foundation, participating in the Vote Everywhere campaign, a nonpartisan, experiential program that recruits, trains and supports over 100 student leaders at 42 universities across the country. The three are hosted at UW-Madison by the Morgridge Center for Public Service.

“Voting is a fundamental right that everyone should be able to get,” Kulstad said. It’s from that basic concept, that the vote ambassadors’ efforts extend from.

Their efforts embody the spirit of a fellow UW-Madison student, Andrew Goodman, the namesake of the organization. Robert and Carolyn Goodman founded The Andrew Goodman Foundation to honor their son after he was murdered along with young civil rights workers James Earl Chaney and Michael “Mickey” Schwerner by Klansmen in Mississippi during the Summer of 1964.

Goodman, who attended UW-Madison his freshman year, committed himself to fighting injustices by traveling through the south to register African- American voters during the Freedom Summer volunteer campaign at 20 years old.

Today, the vote ambassadors carry on Goodman’s spirit, engaging with voters no matter their background or ideology.

Tuesday, Nov. 8 signifies something different for everyone. For some, the election symbolizes a rite of passage and for others, not so much, say the vote ambassadors.

“The most interesting thing I’ve seen is people who don’t want to vote because they don’t like Hillary or Trump, but it’s really important to vote down the ballot,” Rohrer said.

The ambassadors say they encourage voters familiarizing themselves with the options within their district such as who’s running for Senate and the House of Representatives. Rohrer explained these decisions have just as much weight as the presidential election.

But the ambassador’s most important work has come before voters ever touch a ballot.

“Our main focus is registering people to vote,” she said.

At an event last spring, the ambassadors helped over 800 UW-Madison students register in less than four hours. Registration has continued to be a big emphasis this fall. Across the country, the Vote Everywhere program has registered 15,600 new voters 19 states since last year.

Kulstad and Rohrer explained that regardless of political affiliation or level of engagement, all students should vote in the upcoming election. The ambassadors encourage civic participation through multiple efforts, helping students understand the process isn’t as complicated as they think.

“There’s some students that say I don’t know where my polling place is or where to register,” Kulstad said. “If you just Google “where’s my ballot” and put in your address it will show you.”

The ambassadors have worked with students across campus organizations registering people on campus to vote since the semester started. Between now and Election Day, the ambassadors will help students understand all their options for voting.

“I don’t think people know they can vote early,” Rohrer said. “Students can also register to vote before they early vote if they haven’t done that yet.”

And until the last ballot is cast on Nov. 8, Sally Rohrer, Kara Bell and Alex Kulstad will be working tirelessly as champions for voter rights. Just like Andrew Goodman.