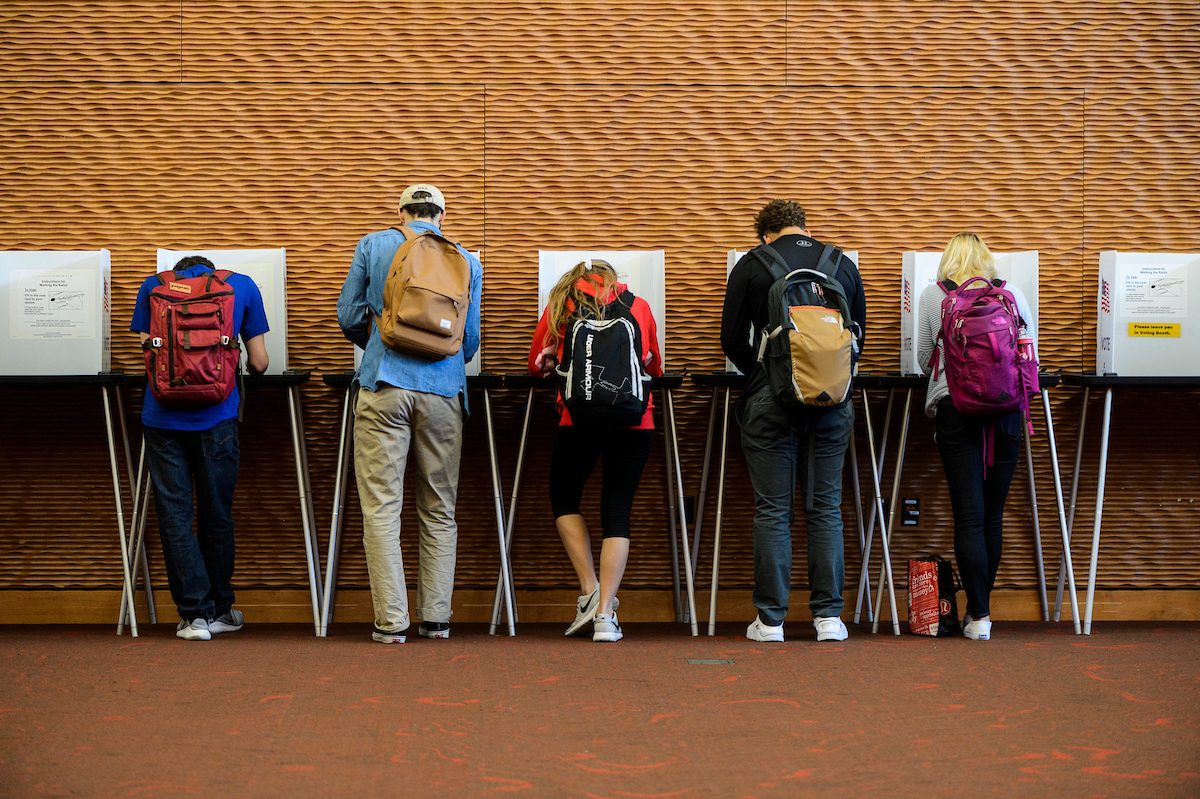 UW-Madison students are off to a fast start in the Big Ten Voting Challenge, with hundreds registering to vote so far this fall.

But it’s no time to let up. The next big push is Tuesday, Sept. 25, when students will be able to register at several sites on campus as part of National Voter Registration Day.

UW-Madison is competing in the Big Ten Voting Challenge, a nonpartisan effort that aims to mobilize registration and turnout at all 14 Big Ten universities. Trophies will go to the universities with the highest voter turnout and the most improved turnout in the Nov. 6 election.

“The voting challenge is a fun competition, but it also highlights the importance of civic engagement in our democracy,” said UW–Madison political science professor Barry Burden, the faculty chair of the Big Ten Voting Challenge Committee.

Students often move frequently and have to re-register at a new address. This academic year, registration has been strong so far, as various groups on campus have pushed it with publicity and registration drives.

So far, more than 1,000 18- to 25-year-olds living in campus wards have registered to vote since the Aug. 14 primary, according to the Madison City Clerk’s office. A similar number registered in this time period two years ago in the presidential election, which typically has much higher voting numbers.

Among campus area wards, the ward including Witte and Sellery residence halls and the Lucky Building leads the way with 113 people registered.

Founded in 2012, National Voter Registration Day is a non-partisan celebration of democracy focused on facilitating the right to vote. The City Clerk’s Office will hold voter registration drives throughout the city on Tuesday. Several will be held on campus:

In addition, an event titled “Voting Forum: We Want You” will be held from 7 to 8 p.m. Tuesday in the Memorial Union. Experts in the fields of political science, policy, and economics will discuss the consequences on society of not voting. A 15-minute question-and-answer period will follow.

Speakers are political science professors John Zumbrunnen and Barry Burden and Craig Gilbert of the Milwaukee Sentinel. Representatives from the Big Ten Voting Challenge will be on-hand to give students the opportunity to register to vote.

The Big Ten Voting Challenge plans to hold a “Vote Fest” the week of Oct. 22, with movies, discussions and other events to encourage students to engage in civic discourse. Early voting will be available on campus from Oct. 22 to Nov. 2.

On the Wisconsin ballot in the Nov. 6 election are U.S. senator, congressional representatives,  governor, lieutenant governor, attorney general, secretary of state, state treasurer, state senator (odd-numbered districts) representatives to the Assembly (all districts).  County offices up for election are sheriff, clerk of Circuit court and coroner (where applicable). ). Student who vote by absentee in states other than Wisconsin will also be including in UW–Madison’s count in the Big Ten Voting Challenge.

“One of the most important values we teach at our universities is the importance of civic engagement. Voting in elections gives our students a voice in the democratic process and in the decisions that affect local, state, and national issues,” the participating chancellors and presidents wrote in an announcement of the Big Ten Voting Challenge.