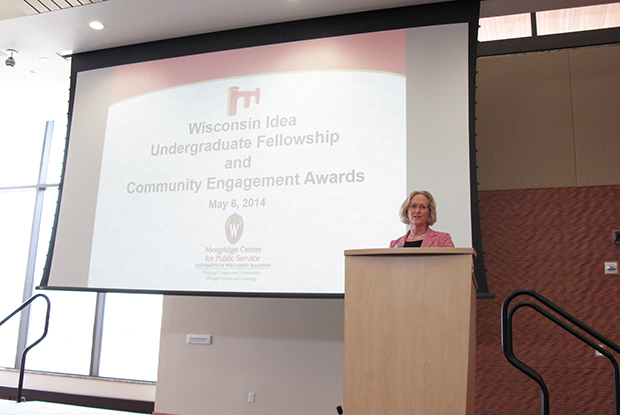 The Wisconsin Idea is alive and well on the University of Wisconsin-Madison campus.

The Morgridge Center for Public Service on May 6 presented three awards to students and one to a community partner who exemplify service and civic engagement.

Awards were given for Outstanding Badger Volunteer, Excellence in Civic Engagement, Excellence in Engaged Scholarship Graduate Student and Outstanding Community Partner. Each recipient has undeniably improved their community and the state through service and leadership.

Second Harvest provides students a hands-on opportunity to be part of the mission to end hunger and give back. Volunteers also gain valuable insight into public health issues that impact local Wisconsin communities.

“Each week, students are welcomed with smiles by the staff at Second Harvest,” said Badger Volunteer and nominator Mary Kojima. “They make it very clear how appreciative they are of us students volunteering.”

Senior Aaron Vogt has tutored at Blackhawk Middle School for six semesters, becoming a valuable resource for the school and helping numerous students gain confidence in their academics.

Making a commitment over the past three years to the students at Blackhawk Middle School, the biology major has built lasting connections with students that he has maintained by returning eachsemester.

“Aaron is very flexible and willing to help in any area, even if it’s not his specialty or his want,” said nominator and Tutor Coordinator Maria Riordan. “He has become such an integral part of our program that he has become an honorary member of our after school staff.”

Riordan says Vogt is always in a good mood and is a great recruiter of other college students to join the volunteer tutoring program.

Senior Caitlin DeVos is not only among the most active and committed advocates in the fight against cancer at UW-Madison, but across the country as well.

DeVos has served two years as president of Colleges Against Cancer at UW-Madison, planning and executing Relay for Life each spring. The Community and Nonprofit Leadership and Sociology major has helped increased participation in Relay for Life on campus by over 20 percent, making UW-Madison’s Relay a Top-15 Collegiate Event in 2013.

“Her passion has permeated the lives of other students and has encouraged them to become better citizens in their community,” said nominator and Faculty Associate Michael Maguire.

In addition to over 500 hours of service with the American Cancer Society, DeVos has also spent two spring breaks with the Pay it Forward Tour, a community service road trip that travels across the country engaging in community service projects.

“She is not shy,” said Maguire. “She has a deep sense of commitment to making positive change happen. She is a doer.”

DeVos also worked as a Youth Counselor for the East Madison Community Center in fall of 2013 through the service-learning class, Interdisciplinary-Human Ecology 350: Community Issues and Service Learning.

The statewide farm to school project has fostered partnerships between school districts and mid-sized farmers, significantly increasing the amount of fresh, locally grown produce being served in Wisconsin public schools.

“The partnerships Lihlani facilitated across the school food supply chain promoted transparency, trust, and equitable relationships, creating social change within of the conventional food system by changing the culture of how business is done,” said nominator and faculty advisor Alfonso Morales.

“This project that she engaged has produced concrete social change in organizations, between organizations, and in school lunch rooms,” Morales said. “A more complete example of the Wisconsin idea would be hard to find.”

Three students were also awarded honorable mentions for their efforts in civic engagement and service.

Junior Emily McKinney was awarded honorable mention for Outstanding Badger Volunteer. The Environmental Studies and Sociology major has served as crew leader for a five-student team of bike mechanics at Wheels for Winners in Madison.

Senior Kelsey Melah was awarded honorable mention for Excellence in Civic Engagement. The Neurobiology major has collaborated with Madison Metropolitan School District teachers, afterschool staff, scientists and retired teachers to improve science education inside and outside the classroom.

Molecular and Cellular Pharmacology graduate student Kristin Andersen was awarded honorable mention for Excellence in Engaged Scholarship—Graduate Student. Andersen has worked extensively in K-8 science education, both as an educator for students in the community as well as an instructor for undergraduate and graduate students on methods of teaching and lesson design for K-8 science.