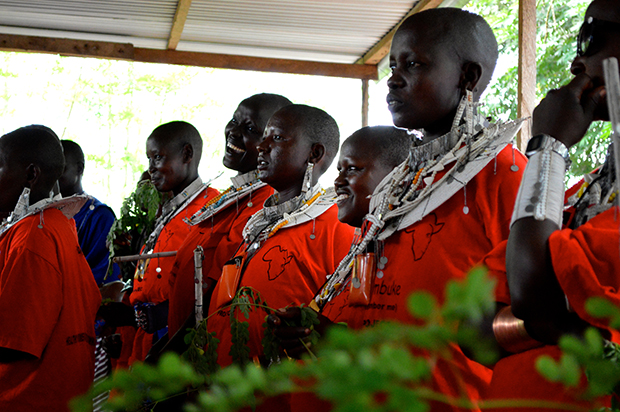 They call it ‘The Miracle Tree.’

The Moringa Tree has been known to thrive in some of the harshest conditions on Earth. Yet, its small, bright green leaves produce nutritional benefits that have reversed the health of entire communities in South America, Asia and Africa.

Just one tablespoon of powder from ground Moringa leaves provides all the nutrients a person needs for a day. And the tree’s seeds can purify water.

But UW-Madison student Aubrey Winkie had no idea about any of this when she was asked to research the tree for a reforestation project by Araceli Alonso, an associate faculty member in the Department of Gender and Women’s Studies.

Aubrey was spending her junior year Kenya and was an intern with Dr. Alonso’s highly-regarded Health by Motorbike program.

“I started doing research and realized how amazing the Moringa tree was,” said Aubrey, who graduated in December with a degree in Gender and Women’s Studies and certificates in Global Health and African Studies. “It has incredible nutritional qualities. It has protein and iron and vitamin A and vitamin C and all the essential amino acids.”

So in April 2013, Aubrey and women in the Kwale District, located in far southern Kenya, planted around 200 Moringa trees. But that was only the first step. Trees alone could not provide life-changing nutrition. Only education could help the community unlock the full miracle of the Moringa.

“I came back to campus and I knew I wanted to do more with it,” Aubrey said. “I wanted it to be in the whole village.”

With the project growing, Dr. Alonso connected Aubrey in fall 2013 with two other UW-Madison students – senior Ali Miller and junior Sofia Halgren. Together, the three submitted an application for a Wisconsin Idea Fellowship through the Morgridge Center for Public Service.

“The project focused on community outreach and awareness on the tree because in order for it to be successful, we wanted to make sure people were accepting of it and willing to add it into their food,” Aubrey said.

Their application was one of nine Wisconsin Idea Fellowship proposals offered funding for the year and the project launched in summer 2014, with Ali and Sofia traveling to Kenya.

On the ground, the pair worked with existing partnerships to put on large community demonstrations, produce skits and host community meals featuring the Moringa powder.

“When we went, we discussed the nutritional benefits of it with the health promoters,” said Sofia, a junior studying Gender and Women’s Studies and Global Health. “And then Aubrey had written up some plays to perform. So when we were there, we distributed them and talked with a lot of the health promoters about how great this tree was.”

Residents even had “Ask me about my Moringa Tree” t-shirts made.

The project really was a community effort, led in strong part by the local women.

“A big focus on the project was that the women took ownership of it and they made a lot of the decisions,” Aubrey said. “And it was community oriented.”

Money from the Wisconsin Idea Fellowship grant bought a milling machine for the area villages to use collectively. Community members voted to share the machine amongst seven villages – creating the ‘Moringa Mill Cooperative” for grinding Moringa leaves as well as corn. And selling extra powder was a new economic opportunity.

“With all the profit that they can make, they can support their families and send their kids to school. And their kids will be a lot healthier,” said Ali, who graduated in December with a degree in Neurobiology as well as a Global Health certificate. “It was really energizing just hearing how far they knew they could take it.”

“The most important thing is that the women in the villages own the project now,” Dr. Alonso said. “Asserting ownership is a first step towards sustainable development.”

Local women also say their role in the Moringa tree’s success has changed traditional opinions on gender in the community.

“Before, men did not let their woman go out,” one woman in the community said in an interview. “Only sitting there and waiting for the men. But now the women have changed their men to know that they have duties to do and we are free now.”

Data is difficult to collect in the Kwalia district, but finding praise for the Moringa’s health benefits is not.

Aubrey estimates over 1,000 Moringa trees now grow in the Kwale District, with community members enthusiastic to plant even more.

And that sustainable enthusiasm and support is what excites Sofia, Ali and Aubrey.

“We learned about community projects and how the community needs to take ownership,” Aubrey said of her courses at UW-Madison. “And I really wanted to make a Wisconsin Idea Fellowship proposal that put the ownership within the community and have them grow with it.”

“You have to ask them what they want, and that’s how you’re successful,” added Ali.

And for the Moringa Tree project, success can be measured in unlimited ways: A more empowered community. A more economically sustainable community. A healthier community.