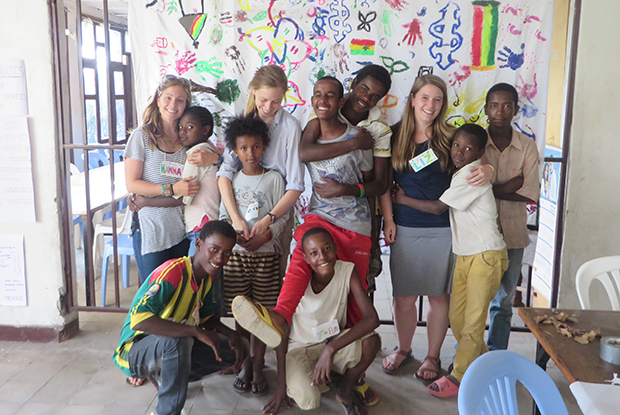 What do sweet potatoes and creative writing have in common? A lot, if you ask recent UW-Madison graduates Hanna Vadeboncoeur and Jessica Lyga.

The pair spent two weeks in Ethiopia this last summer on a Wisconsin Idea Fellowship, educating local children on the nutritional benefits of sweet potatoes while also opening the world of creative writing and book publication.

“I was nutrition, and Jess was creative,” Hanna said. “So that’s kind of how the two ideas merged.”

Hanna and Jessica both transferred to UW-Madison their junior years and met each other in an economics class. Both were also pursuing the Global Health Certificate, which requires a field experience.

“After my junior year, I traveled with the Ethiopia field experience and we did sustainable agriculture that relates to health,” Hanna said. “So I spent about a month there and just fell in love with the people and the place. It was gorgeous and the nicest people I’ve ever met.”

By senior year, Hanna and Jessica were roommates.

“I just wanted to go back,” said Hanna about Ethiopia. “[Jess and I] always talked about what we wanted to do after graduating, and Jess had spent a lot of time working abroad.

So the duo designed a two-week course around nutrition and literacy and applied for a Wisconsin Idea Fellowship through the Morgridge Center for Public Service. Their proposal was one of nine accepted and suddenly Hanna and Jessica had summer plans.

Working with the International Potato Center in Ethiopia, Hanna and Jessica brought their course to the industrial town of Shashameme in the south-central part of the country.

The pair focused their nutrition education on the orange flesh sweet potato, an important crop in combating Vitamin A deficiency. But with children as young as 10, their lessons had to be engaging.

“So while we were teaching about the nutrition, we would have the kids tell stories about ‘Mr. Sweet Potato’ and his adventures,” said Hanna, who studied Community and Nonprofit Leadership in the School of Human Ecology.

“In Ethiopia’s school system, creativity is not really at the front of anyone’s mind. So we thought that using creative writing and storytelling would be a good way to capture the traditional art of storytelling in Ethiopia and also to make the nutrition lessons fun for the kids.”

In week two of the program, Hanna and Jessica turned to the second half of their plan: an ingenious combination of creative writing, local storytelling and empowerment.

Most published materials in Ethiopia are produced in the business language, but very few people speak it says Hanna.

“So not only do you not necessarily understand the writing, it’s also kind of insulting to your own language if nothing is published in your language,” Hanna said. “And they just don’t have the funding to have stories in all your languages.

“So we basically gave the kids blank paper and said write a story about anything you like,” Hanna said. “Not really knowing their proficiency – their level of writing or anything going into it—it was a very big unknown. But they all came up with a story.”

And at the end of the second week, the children decorated cardboard covers, bound their stories and held a ceremony to place 20 new books on the shelves of their small library.

“It was kind of empowerment, kind of an assessment of literacy and nutrition knowledge,” Hanna said. “It was a broad idea we were going at from a lot of different angles. But it worked out really well.”

Jessica, who graduated with a degree in international studies, has since returned to Ehtiopia and works for an organization called Ethiopia Reads, which is now using part of the curriculum she and Hanna created.

And Hanna hasn’t lost the public service itch either, today working with nonprofit DreamBikes, an organization that provides employment to area kids and affordable bicycles to communities in Madison and Milwaukee.

And somewhere between a sweet potato and a stack of new books, Hanna, Jessica and a group of children from Shashameme, Ethiopia learned, laughed and built a few new relationships.

“It was probably the coolest experience I’ve ever had.”