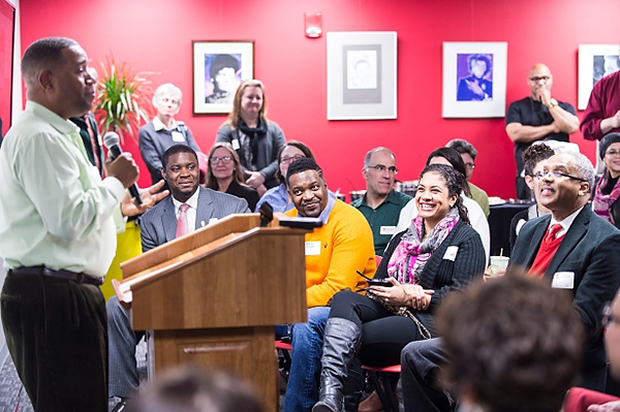 The word “joy” came up often during the grand opening of the UW South Madison Partnership.

It fit the mood: lively conversation in a packed room; a vibrant red wall matching the new red chairs; delicious aromas warming those who braved near-zero temperatures to celebrate.

“This is a place where the energy is bouncing off the walls,” said Emily Auerbach, director of the University of Wisconsin-Madison Odyssey Project.

The Odyssey Project has already begun holding classes for its thirty students at the partnership, located at 2312 S. Park St. in the Villager Mall. The partnership aims to serve as a flexible gathering space and community resource clearinghouse for collaborations between UW-Madison and the South Madison community, benefiting all participants in an exchange of knowledge and ideas.

“It’s more than just symbolic that we now have university anchors at both ends of Park Street. It’s an example of the university meeting people where they work and live,” said Bazzell. “This is a wonderful way to plant the seeds for the next generation of learners.”

“There are many other UW-Madison collaborations that could find a home here and are a natural fit,” said Blank. “These efforts are an exciting start to this partnership. They offer community engagement, they are mutually beneficial, and they help build opportunities for this neighborhood.”

The space has been in the works for several years, but the partnership reflects many years of continued engagement between the university and South Madison.

A previous incarnation of the Office of Community Partnerships was located in the Villager Mall several years ago, but served as more of an aggregator of programs from UW-Madison, Edgewood College and Madison College.

This space partners with existing efforts in hopes of encouraging new collaborations in the future. In addition to the Odyssey Project, current partners include the UW Law School’s Economic Justice Institute, including offices for the Neighborhood Law Clinic; the UW Carbone Cancer Center’s Cancer Health Disparities initiative; the Wisconsin Alzheimer’s Disease Research Center (ADRC); and the Morgridge Center for Public Service. All are meant to target community needs and requests at a strategic location near where people live and work.

The Neighborhood Law Clinic had already operated in the Villager Mall for years, seeing up to 30 people a week.

“We’ve been here in the neighborhood for over a decade, but the really great thing is to be in a collaborative space,” said Mitch, assistant clinical professor of law and director of the Neighborhood Law Clinic. “That’s the difference.”

He described a situation that had occurred earlier in the day, when a client seeking help for a legal issue ended her visit on a hopeful note. As the client shared the changes that had happened in a friend’s life as a result of the Odyssey Project, she began thinking about the other resources available at the partnership.

“We’re already starting to make that type of connection,” said Mitch. “We might help turn around a difficult situation, but now we have all of these resources in the same space to turn a problem into an opportunity.”

Auerbach remarked that it was the first time in Odyssey’s twelve-year history that the program had taken place in a UW-Madison space. The award-winning humanities course met in various spaces, including the nearby Goodman South Madison Library, but often found it difficult to fit their interactive learning into the small rooms where they met.

“We were bursting at the seams,” she said. “We had to be quiet in the library — which is hard to do when we get to Lorraine Hansberry and Shakespeare.”

The evening didn’t only include speeches. Odyssey graduate Tosumba Welch, a Madison College student who intends to transfer to UW-Madison, provided a stirring rendition of Martin Luther King, Jr.’s “I Have A Dream” speech that reverberated throughout the room.

More information about the partnership is available on its website.