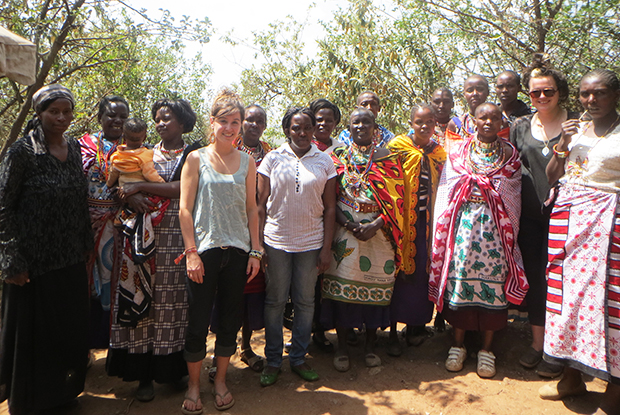 The power of the Wisconsin Idea lies not in the solitary action of a single person, but in the collective action of many. Kayla Sippl knows this well.

When the University of Wisconsin-Madison senior interned at a hospital in Kianjokoma, Kenya, in spring 2013 on study abroad, she found it odd that there was no soap in the patient bathrooms.

The leading cause of death in children globally is diseases that could be prevented with soap, according to international nonprofit Global Soap. Kayla, a biology major from Seymour, Wis., saw a public health crisis. But she also saw a solution.

“I figured I wouldn’t be able to single-handedly tackle the problem,” Kayla said. “But maybe introducing how easy it is to make soap to some communities would help.”

As it turned out, Kayla wouldn’t be tackling the problem single-handedly.

There was her mom, who had been making homemade soap using simple ingredients for years and taught Kayla the techniques.

There was Entomology Professor Susan Paskewitz who encouraged Kayla, an undergraduate assistant in her lab, to pursue the soap-making project. And there was Nelson Institute Faculty Associate Catherine Woodward who had coordinated previous soap-making efforts in South America and served as a valuable resource for Kayla.

There was Kayla’s study abroad advisor, Simon Sakudah, who connected her with his brother James Sakuda, the Executive Director for Indigenous People in Action—who became Kayla’s most important on-the-ground community partner.

And there was the community of Ngong, Kenya, who embraced Kayla’s idea.

With a network in place, Kayla applied for a Wisconsin Idea Undergraduate Fellowship through the Morgridge Center for Public Service. Her proposal to run soap-making workshops in Kenya was chosen as the American Family Insurance Fellowship in Social Entrepreneurship for 2014-15.

“Once she had the idea, she pursued it with passion and creativity,” said Dr. Paskewitz, who served as faculty mentor for the project. “She followed up on every conceivable connection that was suggested and found both US and Kenya-based partners for the work.”

Funding secured, Kayla set to work experimenting with soap-making techniques in her Madison apartment. Animal fat was her primary ingredient of choice, knowing she could find it locally sourced once in Kenya. She then designed trainings and coordinated potential workshops with her community partners in Kenya.

Following the fall 2014 semester, Kayla’s vision became reality as she returned to Kenya over winter break. On the ground, Kayla worked closely with community leaders in Ngong, Kenya, to organize demonstrations of the soap making process so they could then go out to share the knowledge with the people they worked with.

Kayla said her main goal was teaching communities how to make the soap and then letting them decide what they wanted to do with that knowledge. Those who Kayla taught soon began teaching others.

“And I really liked that it was expanding without me because then I could step back and let them do what they wanted,” Kayla said.

In March of this year, Kayla was invited to Clinton Global Initiative University, a 3-day event in Coral Gables, Fla., hosted by President Bill Clinton to bring together college students passionate about solving pressing global challenges.

Kayla had the opportunity to present her soap project at the event, which she says gave her a boost to keep the project expanding.

“The motivation—that was really helpful just being around people who all want to do something,” Kayla said.

With additional funding, Kayla says the project could expand to hospitals and schools in Kenya. She also envisions the potential of marketing the homemade soap for sale in tourist markets and hotels in Kenya, providing new economic opportunities—particularly for local women.

“I think the project has had a large impact on Kayla, in terms of her development as a leader and her growing confidence in her own abilities,” Dr. Paskewitz said. “I am also heartened by the positive response she received from the communities and the indications that they will continue to explore this as a way for women to create and market income-generating products.”

Kayla, who graduates from UW-Madison in May, plans to take a year or two to explore global health opportunities around the world. Eventually, she hopes to pursue a master’s degree in global health.

Two years ago, Kayla Sippl saw a problem in a hospital nearly 8,000 miles from the UW-Madison campus. And she chose not to ignore the problem, but instead built a network in Wisconsin and in Kenya that allowed a community to come together to solve a pressing issue.

“It’s something I wouldn’t get out of just the classroom.”

That’s the power of the Wisconsin Idea.