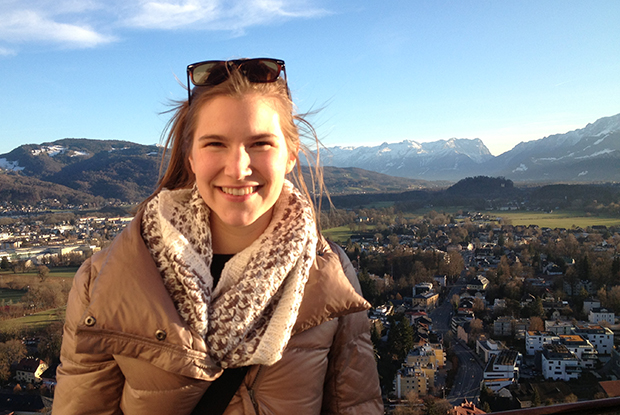 Dana Vielmetti graduated from UW-Madison in 2011 with degrees in political science and psychology — as well as an itch to make a difference in the world. She also graduated with what she credits as a true spark in her professional life: a liberal arts education.

This fall, the Mequon, Wis., native is heading back to school after a yearlong fellowship in Japan and three years at the Ad Council: one of the country’s leading nonprofit and government advertising agencies. We caught up with her recently to talk about about her public service inspirations at UW-Madison and how she’s carrying out her service-minded passions after college.

What was it about UW-Madison that inspired you to pursue a public service–minded life?

I think part of it was, my mom was a school psychologist, and my dad is a journalist at the Milwaukee Journal Sentinel. So growing up, I wanted to model my career after them. I think they really pushed me to do something that I believed in and that was contributing positively to the world.

What public service activities were you specifically involved with as an undergraduate at UW-Madison?

I took only one official service-learning course, which was [now Morgridge Center director] Kathy Cramer’s class. It was called Poli Sci 425: Democracy and Difference. I took that as a sophomore. It was a really awesome small class — a lot of discussion. And through that, we volunteered three hours a week at a local nonprofit. I was at the Bayview Community Center doing youth recreation and education. Having the opportunity to work closely with a professor and having a service-learning component as part of the class was a really cool experience for me.

I was also pretty involved with the GUTS Conversational English program. I started doing that as a freshman, and I did that through my full four years. I volunteered once a week with several international grad students, just helping them with English and orientation to Madison. I really, really loved that program and had a very positive experience that led me to apply to the JET program in Japan after I graduated — so that impacted me even from a career standpoint.

Can you tell us more about the Japan Exchange and Teaching (JET) Program?

The JET Program is through the Japanese government. Basically, its mission is to improve English skills and increase international exposure in public schools there. There was a native English speaker in every public high school and middle school in the entire country. I was teaching high school English there for a year.

And then you went to work for the Ad Council in Washington, DC. How have you been able to incorporate your passion for public service into a career?

I actually found out about the Ad Council at UW-Madison. I distinctly remember reading about it in a psychology textbook and thinking that this was the perfect combination of all my interests: behavior change and social impact and doing good.

The Ad Council is a nonprofit. We are the leading producer of public service advertising and social-issue marketing for both government and nonprofit clients. I have four different campaigns with the U.S. Department of Transportation, so I’m pretty heavily focused on driving safety. I work on drunk-driving prevention, car seat safety, seats belts, and a new underage anti–drinking-and-driving campaign.

We are basically the liaison between our government and nonprofit clients and big ad agencies that do all of our actual creative work pro bono. We have relationships with the media community across the country, so we don’t actually buy any media at all — it’s entirely donated. In one year, we get over a billion dollars in media. We would be one of the top 10 advertisers in the country if you combined all the donated media we get in a year.

What does the future hold for you in the fall, heading back to school?

I’m going to get my MBA. Working at a nonprofit, I’ve realized that we run a nonprofit very much like a business, and I think the nonprofit world needs people who have a business background and business skills. A lot of the people I’ve met on the client side here and in the government and nonprofit agencies — and I would say more so in nonprofits and government agencies — have an MBA and had gone back to get functional expertise. Then they were able to bring that back to the nonprofit sector or the private sector and really apply those private-sector skills to a job in corporate social responsibility or public-private partnership.

What’s the future you see with private-sector companies and nonprofit-type corporate social responsibility?

I’m really interested in how corporate social responsibility (CSR) is evolving because, even over the past three years at the Ad Council, you’re seeing the unfiling of CSR. You used to have someone whose role was corporate social responsibility, or you had a whole department. But I think — and in a good way — that the way consumer trends are going and what people are expecting from corporations through social media and all the interaction you can have with brands, they don’t want it to be a silo. Hopefully in my lifetime, it will continue to trend that way, and you won’t even have to have a separate CSR department because people will be acting more for the social good because that’s what the consumer is demanding.