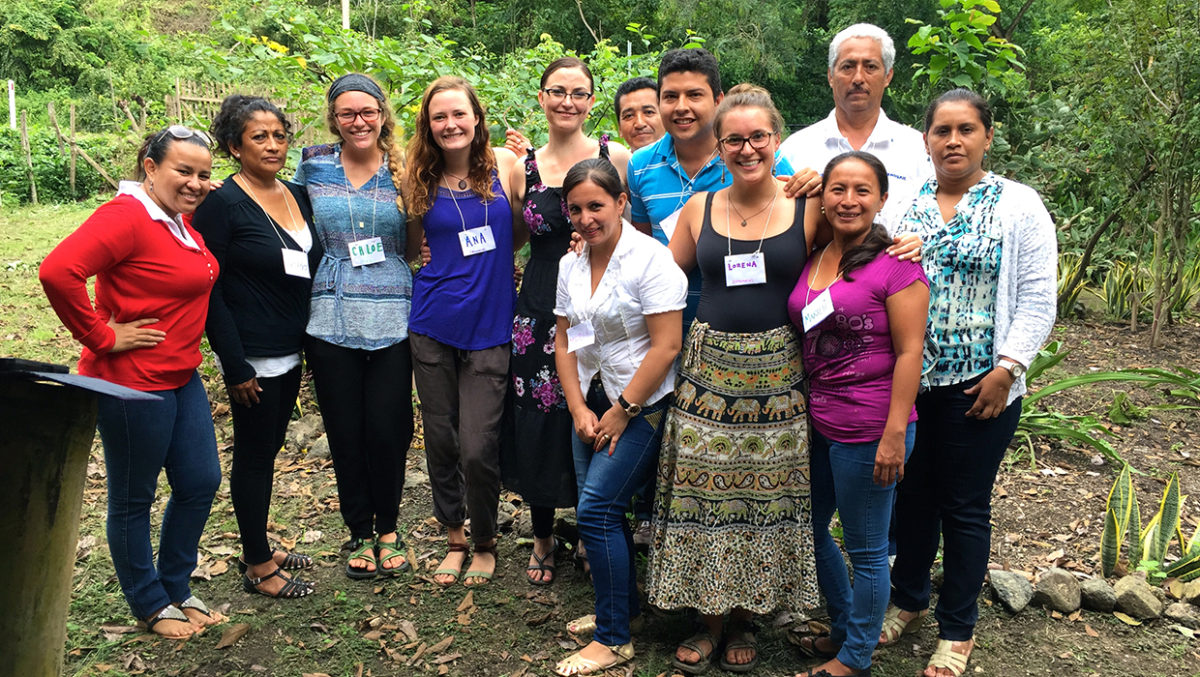 Before they even left for their study abroad program in Ecuador last spring, UW-Madison students Brenna O’Halloran and Lauren Feierstein had already decided they wanted to stay for the summer as well.

In a pre-study abroad meeting, Catherine Woodward, a faculty associate in the Nelson Institute as well as president of the Ceiba Foundation for Tropical Conservation in Quito, Ecuador, offered to students the “Ceiba Tropical Conservation Semester” program the possibility of summer research funding for service projects.

“Brenna and I were like, ‘we’re in, we want to stay longer,’” said Feierstein.

The pair, now seniors, met with Woodward soon after to discuss their interest in working in environmental health and education. That conversation turned into an application for the Wisconsin Idea Fellowships through the Morgridge Center for Public Service.

O’Halloran and Feierstein developed a proposal for a three-day environmental education training workshop for elementary and middle school teachers from the rural communities of Tabuga, Camarones and Tasaste in coastal Ecuador.

According to the students, the socioeconomic disparities between communities in the capital city of Quito and those of the Pacific Coast mean there is little access to basic resources like clean water or electricity, and area teachers do not receive formal job training.

So O’Halloran and Feierstein designed an environmental education workshop that would be a unique resource for the rural teachers. Their Wisconsin Idea Fellowships proposal was one of six accepted for 2015-16.

“We were living in a forest with no electricity, no internet. And we were speaking our second language, in a different culture,” explained O’Halloran, a geography, environmental studies and conservation biology major.

Early and clear communication was key to the project. So was collaboration.

The UW-Madison students worked with Chloe Anderson, a University of Miami graduate student. Anderson conducted supplemental interviews of the participating teachers to better understand their prior experiences with education and feedback.

“Brenna and I get all the credit, but she was doing a third of the work the whole time,” explained Feierstein, who is studying Latin Amercain, Carribbean & Iberian studies, zoology and environmental studies.

The project also received important support back home from Maria Moreno of Madison-based Latino Earth Partnership and Sarah Niesen, a bilingual elementary school teacher with the Madison Metropolitan School District. This support helped O’Halloran and Feierstein develop the curriculum for their workshop and establish legitimacy in the unfamiliar communities they would be working with.

“Really, it’s amazing how many resources we had. We were able to pull people from their niche to come do something special there,” said Feierstein.

Both students say forming connections was vital in communicating the legitimacy of their project to federal education officials on down to individual teachers, who were not initially receptive to the project.

Despite their thorough preparation, O’Halloran and Feierstein assumed they would be working with teachers who had participated in a similar workshop the year before, not anticipating a complete turnover in school administration and teachers in the meantime.

“We were under the impression that all of these people participated in something beforehand and were already interested, so making that assumption was a big mistake,” explained O’Halloran.

After a more thorough conversation about the program, the teachers became far more receptive.

“After that, it was really positive. Especially once we did the workshop itself, they realized it wasn’t us up there lecturing them,” explained Feierstein.

The pair were aware of the importance of crafting the workshop as an opportunity to personally connect with teachers and share different approaches to education, rather than advocate their style as superior to those of the teachers.

The students achieved this atmosphere through a variety of activities, beginning with a discussion of individual teaching strengths and weaknesses, which helped the teachers feel more comfortable opening up.

“It was awesome to see. The teachers became really proud sharing their strengths,” said Feierstein.

For the remainder of the workshop, O’Halloran, Feierstein and their mentors coordinated short presentations on environmental subjects like water quality, followed by interactive activities and discussions.

The students say that for as many unexpected challenges that arose throughout the project, the workshops also resulted in some unanticipated rewards.

Teachers at the workshops initially sat at separate tables organized by their own individual communities and were reluctant to discuss with others. But activities grouped teachers across communities and the dynamic soon shifted.

“By the end, they were all working together, making jokes, and it was really cool to see sense of community expand outside their town,” said Feierstein.

“The Children were loving it”

In the last week of their project, Feierstein and O’Halloran observed the teachers in their classrooms, and the impact of their work was clear.

“The children were loving it,” said O’Halloran.

The teachers were enjoying the addition to their curricula as well.

“For us to do hands-on activities was totally foreign to them,” said Feierstein. “Getting the teachers outside of their comfort zones was a big obstacle.”

“Now the teachers are learning with the kids, instead of teaching in the traditional sense.”

O’Halloran and Feierstein extended their Wisconsin Idea Fellowship project through the end of the fall semester, and they’ll be applying for other grants to pursue a second workshop in the summer of 2016.

Though their project was challenging, both are adamant about encouraging other students interested in the Wisconsin Idea Fellowships to “definitely do it.”

“It’s challenging, but in a good way,” explained O’Halloran. “It’s rewarding. It really makes you think outside the box.”

“Your plan is going to change a million times, you’re going to face obstacles,” said Feierstein. “There was a point where we thought we’d have to call off the workshop.”

“And I learned so much from this experience. So much more than I ever would in class,” she laughed.