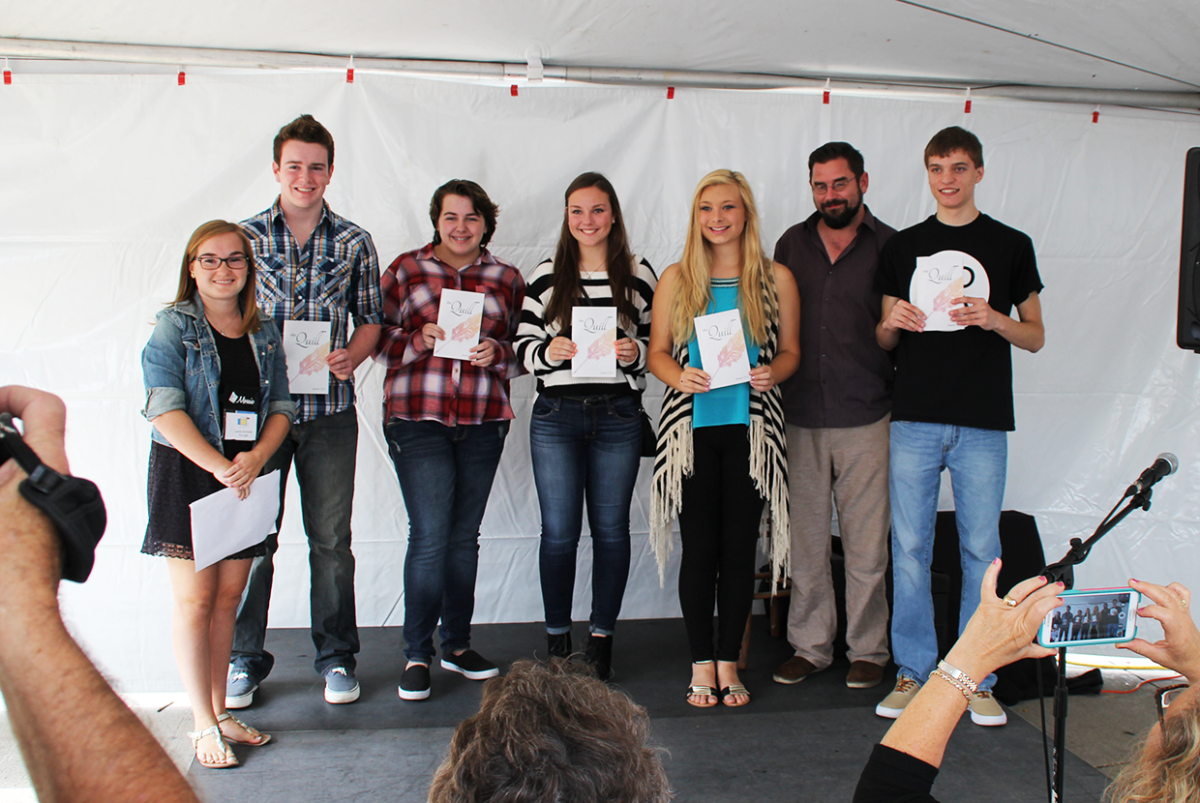 On a warm August afternoon this summer, a group a nervously excited young writers took to a small stage at one of Wisconsin’s largest arts festival.

Never mind that most of them had never performed their own work before, or that most had never been published just three months earlier. Some read fantastic tales of creative writing. Others performed passionate and personal poetry.

The middle and high school-aged students were at the culmination of a new summer-long project aimed at cultivating and publishing young writers in Green Bay. The project was born from the experiences of UW-Madison sophomore and Green Bay native Laura Schmitt.

Schmitt, an English and journalism major, came to UW-Madison from Green Bay with a love for creative writing. As a freshman, she got involved with Illumination, an undergraduate literary journal run through the Wisconsin Union Directorate Publications Committee. It was there she saw how powerful it could be for a young author to be published.

“I just thought it was so cool that we were providing this opportunity for students on campus to be published,” Schmitt says. “I think young writers are often neglected because people might not take them seriously. Which is a shame, because they have a lot of talent.”

This gave Laura an idea: what if young writers back in Green Bay had this same opportunity?

“Growing up, I was always interested in creative writing, but there wasn’t really an outlet for me to explore that in Green Bay,” Schmitt said.

It was then that the idea of The Quill was born—a new literary journal for middle and high school students in Green Bay.

Schmitt’s idea was one of four projects chosen by the new Wisconsin Open Education Community Fellowship: a collaboration between the Morgridge Center for Public Service, the Division of Continuing Studies and UW-Madison’s Educational Innovation initiative. The fellowship program challenges students to identify needs in Wisconsin communities and to work with community partners and faculty mentors to develop projects that move toward solutions.

“The Fellowship was born from a desire to encourage and support students who want to make connections and engage with their communities—who want to actively experience what the Wisconsin Idea really means firsthand,” said Lika Balenovich, Communications Coordinator with Educational Innovation, “As well as to encourage students to explore the topics and ideas presented in UW-Madison’s Massive Open Online Courses (MOOCs).” Schmitt’s project was guided, in part, by the spring 2015 MOOC, “Shakespeare in Community.”

Kevin Mullen, Assistant Director for the UW Odyssey Project at UW-Madison’s Division for Continuing Studies, served as the faculty mentor for the project.

Schmitt also forged a partnership with Mosaic Arts, a nonprofit dedicated to arts education in Green Bay that also runs one of the state’s largest arts festivals, Artstreet.

“We see a lot of students at UW with big ideas,” said Kathy Cramer, Director of the Morgridge Center for Public Service. “And when they link those ideas to community expertise and resources, some really impactful things can happen.”

During summer 2015, Schmitt returned to Green Bay to work with Mosaic Arts and launch The Quill from scratch. Initially, submissions to the literary journal were slow. “At first I was worried there wouldn’t be the demand. I thought maybe there weren’t a lot of other kids like me,” Schmitt says. “But once I started going to the schools and talking to students face-to-face, there was a lot of interest.”

She needn’t have worried. The Quill ultimately received 42 submissions, ranging from short stories to expressive poetry. Twelve entries were published in a printed journal, while the entire 42 are available in an online edition.

Schmitt also wanted to help those students become better writers. Ten joined her at a coffee shop in Green Bay one day this summer for a writing workshop. Mullen, who has an extensive background in writing education and previously worked for the UW-Madison Writing Center, traveled to Green Bay to be part of the workshop.

“I think for the students, having a professor to work with just gave it more credibility,” she says “It was really impressive to them. He was awesome.”

Mullen says the whole project was an ideal model for extending the university’s resources across the state. “So the fact that this Fellowship exists is terrific. And if anything, we need to do more of it. There should be more ways that the state —which provides so much financial support to the university—can benefit from it. And not just in terms of job creation, but also in terms of the humanities, the liberal arts and this kind of intellectual work.”

Schmitt says the most exciting part of the project was watching the aspiring writers read their work at Artstreet in August. The 2015 Artstreet, which drew 75,000 visitors, marked the first time the festival featured a literary arts performance stage in its 34-year history.

“The whole day we had a crowd,” Schmitt says of the new stage. “All the chairs were full and people were standing around listening. And it was just so fun to see the students’ families supporting them and they just seemed so excited to be there. A lot of the kids said it was the highlight of their summer.”

Festival organizers have already decided to bring the stage back next year, and area teachers have approached Schmitt about incorporating the journal into their curricula. Long term, Mosaic Arts will take ownership of The Quill to ensure the project’s sustainability.

“Any time you get a teenage writer published and then performing on a stage, it can have a transformative effect on how they see themselves and their future,” says Mullen. “These students left feeling like they were writers now.”