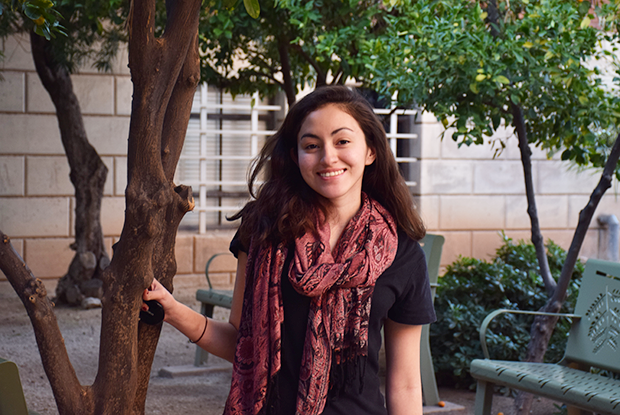 It wasn’t the dry heat of the Arizona sun that Alex Arriaga found surprising.

The UW-Madison senior, traveling south from Wisconsin to collect stories of recent immigrants, found a diverse and complex world in communities that sit right on the border. She saw firsthand what makes up the unique fabric of border communities and realized that many in Wisconsin know very little about them.

Back in Wisconsin, Arriaga, who is studying journalism and Latin American, Caribbean, & Iberian Studies, has worked to address that discrepancy in awareness one conversation at a time.

“Because [we’re] removed, there’s less of a hyperawareness like there is on the border of Mexico,” said Arriaga of the different climate in Wisconsin.

As part of her Wisconsin Idea Fellowship with the Morgridge Center for Public Service, Arriaga has spent part of her senior year interviewing the diverse group of people who make up a border community in order to gather a comprehensive collection of experiences related to this complex issue.

The project began when she traveled to Nogales, Arizona, over a winter break and became familiar with the Border Community Alliance, an organization that later became her community partner in the fellowship. The alliance aims to connect several different volunteers and organizations in an effort to address issues associated with immigration.

Arriaga’s intrigue grew after learning more about the alliance and the work being done on the border. “It’s encouraging to see that there is a lot of work being done,” said Arriaga.

While reflecting on the huge amount of volunteers and organizations dedicated to the issue, Arriaga attributed their dedication to the fact that the issue is right in front of them. “They see the problem everyday. So they come together and just do their part,” said Arriaga.

After learning about the Wisconsin Idea Fellowship from an advisor in her scholarship program, Arriaga saw the opportunity to pursue an idea she had already developed. The fellowships are awarded annually to semester or year-long projects designed by undergraduate students with a community partner that aim to address a local or global community issue.

With the scene set and connections made, all that was left to do was listen. “I wanted to talk and listen and get these stories out,” said Arriaga.

While her Wisconsin Idea Fellowship holds the ultimate goal of creating a multimedia story collection of the female migrant experience, her immersive interactions have increased the capacity of the project to reveal more stories and experiences.

Why is the project important to Arriaga? For the same reason, she believes, that it should be important to everyone.

“Our nation is already made up of immigrants but most of our nation’s growth is through immigration, especially Latinos. They are becoming a huge demographic in our country right now,” said Arriaga.

With that in mind, Arriaga believes this population deserves more of our attention.

“I don’t like saying certain people don’t have a voice,” said Arriaga, “I feel like you just need to listen. It’s really important to be there and be present.”

To this young journalist, getting the stories published is just the half of it. What really matters is being present with the people.

And Arriaga was present. During her time on the Mexico border she sat in soup kitchens frequented by migrants, worked with community organizers and volunteers, and even toured the border patrol headquarters. All for the sake of hearing every side of the issue.

But no matter who she talked to, or what their opinions on immigration were, they all agreed on one thing: change is necessary.

“The general opinion is that there needs to be immigration reform,” said Arriaga.

Why here? Why did you leave?

After working in the border communities and collecting stories and experiences, Arriaga returned to Wisconsin and continued her work. Although Wisconsin is far from the border, Arriaga has identified key communities of immigrants at home and reached out for their experiences as well.

Karma Chavez, a UW Associate Professor in the department of Communication Arts, has served as a faculty mentor for Arriaga throughout her Wisconsin Idea Fellowship. She applauds Arriaga’s efforts to continue the project in Wisconsin.

“It is equally significant to tie [immigration issues] back to people living in our own communities, which is part of what makes Alex’s work so good. We have a significant immigrant population here and it is crucial for people to understand what our neighbors may have gone through and sacrificed to get here.”

While Arriaga’s work is recognized as important, it is equally as unique in the Wisconsin Idea Fellowship landscape: being one of the only projects this year with a liberal arts focus and approach. Her comfort with the subject matter comes from her interest in her parents’ own journey from Mexico to the U.S. when they were young.

Above all, Arriaga encourages students engaging with community issues and organizations to remember who is truly benefiting from their work.

“Keep in mind that you’re serving a community and how what you are doing affects those around you,” offered Arriaga as advice.

Arriaga has learned a lot from her experience. She has explored an issue and uncovered some of the harsh realities that force so many migrants to flee their homes. But in light of the disheartening truths, encouragement also accompanied those experiences.

“Despite whatever policies are in place, there is a lot of work happening on the border already,” said Arriaga.

Although the formal project will soon end with the conclusion of her Wisconsin Idea Fellowship in May, Arriaga hopes to continue her work with border communities after graduation and remain a part of the immigration work being done in the Southwest.