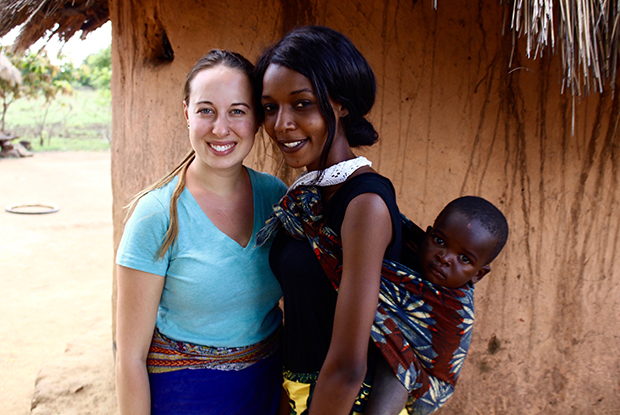 Where most of us see creepy crawlers, UW-Madison senior Marjorie Kersten sees the solution to global malnutrition.

We’re talking about eating insects—or “entomophagy” if that word makes the idea easier to stomach. And Kersten, a 2015-16 Wisconsin Idea Fellow with the Morgridge Center for Public Service, believes that insect micro-livestock farming could be a nutrition revolution.

Eating insects is, in fact, not at all uncommon. And insects can be densely packed with nutrition. In the United States it may be an obscure practice, but Kersten says we’re in the minority.

“There are 130 nations that consume insects regularly, and there are 1,900 knowable species of edible insects,” said Kersten. “So there’s a lot more of it going on than people realize, I think.”

Like most of us, Kersten never imagined she would end up devoting years of her life to edible insects. She was pre-vet for her first two years at UW-Madison. Oh, and she’s vegan.

But spring semester her sophomore year, Kersten signed up on a whim for Health Impact Assessments of Global Environmental Health, taught by Dr. Jonathan Patz. The class changed everything.

“I was having a crisis of what I wanted to study and do with my life,” said Kersten, now a Community and Environmental Sociology major. “So I reached out to her and I was like, hey your research is really cool and I want to get more involved in global health and agriculture.”

Kersten was put to work as a sort of mealworm personal chef. Her job was to test how different feeds affected the growth and reproduction of the insects. And the more she got to know the mealworms, the more interested she became.

“We were, at first, just thrilled to have new energy on the project,” said Stull, “But it was soon evident that Marjorie’s commitment was much deeper than that of a short-term volunteer. Her enthusiasm and devotion to the project proved to be long lasting.”

So after some encouragement, Kersten applied for a Wisconsin Idea Fellowship to help fund a year-long community-based study researching opportunities and barriers to insect consumption in both Zambia and the United States. Entomology professor Susan Paskewitz agreed to serve as her faculty mentor.

But before she was going to ask anyone else to eat an insect, the vegan had to wrestle with her own ethics.

“I had a bit of an ethical dilemma. Even talking about killing them makes me a little upset,” said Kersten. “What would be the implication of me promoting edible insects but not being willing to eat them myself?”

Kersten decided in the end that it would be more ethically wrong to promote eating insects without eating them herself.

For the record, she says mealworms taste kind of like soy nuts and peanuts. And crickets taste like popcorn. She tried a couple different recipes, including cricket bars and mealworm chocolate chip cookies.

“I cooked once at my apartment and once at my parent’s house,” Kersten said. “And my parents were like, what is that smell? What are you doing in here? And my roommates were just sort of like, oh back at it again.”

Kersten brought her cookies (which she said tasted like peanut butter chocolate chip cookies) to the Madison Children’s museum, which has a robust entomophagy education program. The treats were a hit with the kids.

Over the course of the past year, Kersten has been conducting focus groups with various UW-Madison student organizations. When she met with a group, she would first survey their initial attitudes towards insect eating, then she introduced some education on the practice along with the opportunity to try insect-based food. That was followed by another survey.

Kersten offered up cricket protein powder power bars in the sessions. Only the entomology student organization was upset they weren’t asked to eat whole insects.

This past winter break, Kersten took her study to Zambia where she traveled the country learning about current insect eating practices. She met with university students in the Zambian capital of Lusaka, offering the same pre-test, education, tasting and post-test as she did in Madison. Although some Zambian students had consumed insects regularly, many others never had.

So she resorted to an American collegiate delicacy to recruit students to the study.

“We incentivized pizza for people to come,” said Kersten. “Pizza parties are really popular, I guess. I mean, they are here too. But there, people get really excited about pizza. More so than I’ve ever experienced in my life.”

In rural Zambia, Kersten discovered more urgency for her research. Zambia is experiencing one of its worst droughts in recent memory.

“They were super worried about their crops and their ability to feed themselves and their families because the drought had scorched all their crops,” said Kersten.” I walked out into the field and half the corn was brown and crumbly.”

Kersten describes Zambia’s malnutrition rates as “scary large.” But the right edible insects can be raised in droughts and can survive off feed that wouldn’t be valuable for human consumption. A sustainable insect farming operation could bring reliable nutrition in these areas. Kersten also found Zambians interested in the economic impact of insect farming.

“They’re really interested in the entrepreneurial aspect,” said Kersten. “We’re promoting the insects as a first and foremost feed yourself, feed your family. But if you get this huge colony going and you have extra insects and you want to sell them to your neighbor and start a small business, that’s really great as well.”

Kersten stressed how important it was for her to get to know the community needs before implementing anything. Her project’s mission was to collect data and ideas that can inform solutions the community wants. But climate change has left the communities she visited with few options.

“Not even the elders have ever seen it as hot as it is,” said Kersten. “So they were really open minded to anything at this point that can provide a secure option of food.”

For her project’s commitment particularly to engaging with women in Zambia, Kersten was awarded the first-ever Wisconsin Without Borders 4W Award this spring. But a long-term solution will continue to require more work. So Marjorie, Valarie and others will keep listening.

“What has made Marjorie’s project successful thus far is her ability to listen first,” said Stull. “What I mean is that while she brings passion to everything that she does, she also proceeds with an open mind, some form of caution, and a knack for listening. When she doesn’t know, she listens.”

And so the next time you find yourself quick to judge insects for dinner, you might just be wise to listen too.