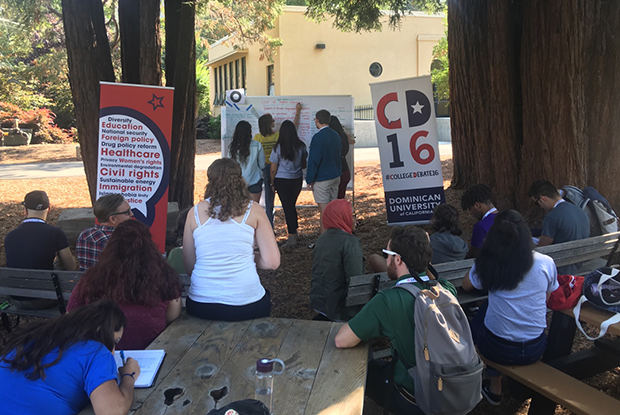 By this point, we probably all have a few questions we’d like to ask the presidential candidates.

And that’s exactly the premise behind the 2016 College Debate, a first-of-its-kind, non-partisan program with the goal of giving a voice to college students across the country during the three presidential debates that will take place this fall.

The aim: Present the Commission on Presidential Debates with a list of questions prepared by college students to be asked of the candidates during debates.

The process began back in June when student delegates from over 150 college campuses around the country gathered for three days at Dominican University of California to begin a discussion on the issues most important to them. They left with the tools to organize issue-focused events at their school and then spent the summer gathering perspectives on important issues from their peers.

“The theory was, what if youth issues decide the next U.S. President?” said Jacquelyn Moss who represented UW-Madison. Not far-fetched idea considering 83 million Millennials could make up 31% of the voting population.

Sept. 6-8, the delegates returned to Dominican University for the 2016 College Convention where they entered into caucus to first decide which issues to focus on. Nine initial issues were whittled down to five: education, social justice/ civil rights, economy/ income inequality, foreign policy and immigration.

“As we stood in various parts of the room for each issue, the conversation got heated,” said Moss, who is pursuing a master’s in Curriculum and Instruction. “At one point we were deciding between the environment and foreign policy and it was almost split. We had a representative from each give their argument and we eventually decided on foreign policy.”

On the second day of the convention, delegates rotated through discussions on the different policy areas. Their goal was to create three specific questions for each policy area, which were then brought to a town hall event broadcast live by MTVU and ABC Digital.

During the 90-minute event, students shared personal stories about the topics and read off the questions developed. The group took a vote to determine the final question in each policy area, with two ultimately chosen under foreign policy because of a tie vote.

After a months-long process and days of debate, the delegates had six questions in hand. The event culminated in planning next steps for engaging each delegates’ campuses and getting the debate moderators to accept the questions.

For Moss, the 2016 College Convention was an opportunity for students to disprove stereotypes.

“Civic Engagement is my passion,” said Moss. “I hate our generation being considered disengaged or uninterested in the political process. I think that is simply untrue and I want to contribute to any effort that disproves that. I honestly believe our democracy is better served with everyone voting, even the people I do not agree with.”

Moss is a Special Registration Deputy with the City of Madison and also works for theCampus Election Engagement Project, assisting Wisconsin’s colleges and universities to get their students ready to vote. Through her work, she finds students want to be involved but don’t always know how to navigate the complex process.

“Students aren’t disinterested. They want to participate but the process can be complicated and through my work I seek to ease the process,” said Moss. “I know we can be the most active generation with a little support and encouragement from our fellow peers and citizens.”

Moss calls the entire 2016 College Debate experience “amazing” and says she learned a great deal from her fellow delegates who took their work extremely seriously.

“The questions we created are truly a reflection of our work and how seriously we took on our goal. We did not goof around or suggest ridiculous questions for the candidates to answer.”

And what now? The delegates will wait to see if their questions are read by the debate moderators. Either way, the 2016 College Convention succeeded in bringing together diverse voices from campuses across the US to discuss issues that will greatly affect their lives.

“We sincerely have an interest in this election and we understand what is at stake,” Moss said. “Therefore, the candidates should take us seriously as well. We have a voice, our voice matters and we will make it heard on election day and vote.”

Economy and Income Inequality
How would you restructure governmental assistance programs for the unemployed or impoverished to obtain self-sufficiency?

How do you plan on supporting Syrian civilians without creating further conflict with other political actors?

Social Justice/ Civil Rights
What will you do to reduce the recidivism and mass incarceration rates in communities where poverty and violence are prevalent?

Immigration
What is your plan for aiding the employment of skilled refugees and immigrants in their respective fields?

Education
How will you ensure quality education to areas of socioeconomic disadvantage both in terms of K-12 and access to higher education?