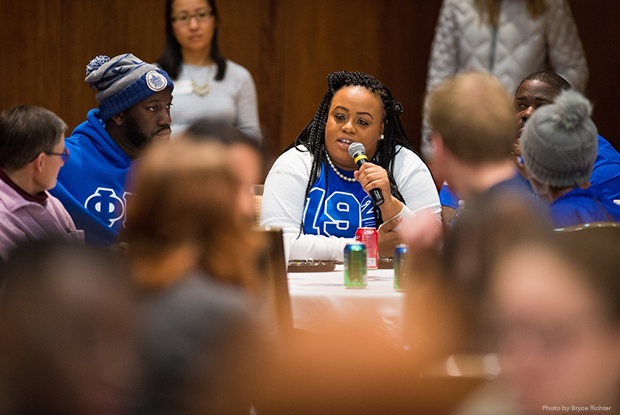 Martin Luther King Jr. is known for poetic words and heroic actions. On Monday, the University of Wisconsin–Madison community came together to consider King’s legacy and how he continues to inspire. It was both a recognition of progress made and a reminder of the work that yet needs to be done.

The event included student speakers, conversation, an art project and a food drive to support The Open Seat, a food pantry on campus.

“Donating a box of cereal or donating $10 doesn’t seem like much but history teaches us small acts lined together can form a chain of hope,” said Patrick Sims, UW–Madison’s vice provost and chief diversity officer. “Be part of the first link in that chain.”

Students spoke about the impact King had on their lives and how he’s inspired them to continue his work.

Penda Smith, a freshman First Wave Scholar from New York City, talked about the struggles and triumphs of black women from Coretta Scott King to Michelle Obama and dedicated poems in their honor.

Matthew Lewis, a senior from Milwaukee, spoke of the pain and fear caused by incidents like the 2015 shooting of 12 people at a church in Charleston, S.C. King’s words shouldn’t be used to silence pain, he said.

“No matter how uncomfortable it may make us, we can’t rewrite history. Dr. King’s voice was not passive,” Lewis said. “His voice did not seek to make black rage palatable. His voice simply said, in the most peaceful way possible: We as a people are tired. It said, I love you enough to see your humanity even in the moments you do not see mine. It said to marginalized people, I see you. I see your pain is valid, and yet we must keep moving.”

Click here to see the entire article on news.wisc.edu