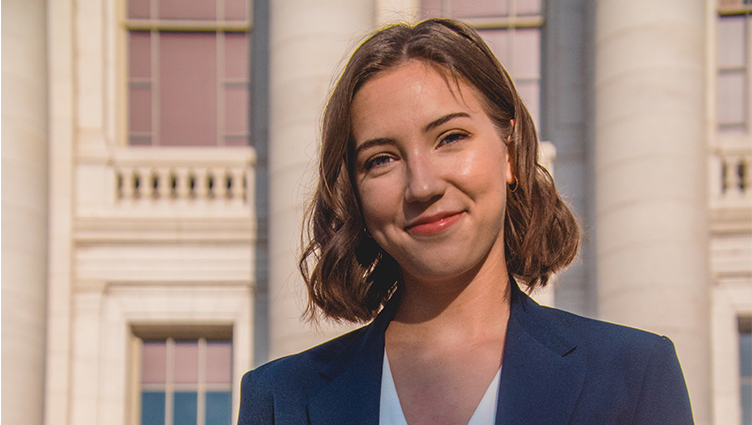 Happy National Transfer Student Week from the Morgridge Center for Public Service to all the transfer students on campus. Transferring universities seems like a daunting process, but we’re proud of the students who took that leap of faith to become a Badger.

The Morgridge Center would like to especially highlight one of our Operations Intern, Lauren Hoffarth. Hoffarth is a junior double majoring in gender and women studies and political science with a certificate in global health.

Originally from Janesville, Hoffarth attended the University of Minnesota-Twin Cities after graduating from high school. While there, she majored in nutritional sciences, but soon realized that she wanted to be in Wisconsin’s capital working in politics instead.

“It wasn’t too much of a culture shock or anything like that, because I’m familiar with the city [Madison], but coming to the university was obviously different,” Hoffarth said.

Hoffarth made it a point to immediately get involved at UW-Madison when she transferred her sophomore year. She got involved with the Undergraduate Research Program where she did research on the sociology of gender. The program inspired her to further her studies in gender and women studies.

“Because you don’t have that forced scenario of living in the dorms with each other, you have to put yourself in that situation by not only getting involved in things that you’re interested in by going outside of your comfort zone,” Hoffarth said. “I started getting involved in College Democrats and National Organization for Women my freshman year. And now I’m the Political Science Students Association Civic Chair.”

As an Undergraduate Research Scholar, Hoffarth was able to make connections with professors and as a transfer student, the biggest difficulty with transfer students usually lies in making new friends.

It’s a common misconception that students make all their friends as freshmen living in the dorms. But by getting involved and moving through your major, Hoffarth said your friend group will change regardless of whether or not you transferred.

“It’s just a good skill to have too. Even though you’re sort of forced into the situation of putting yourself out there, that’s what you’re going to have to do your entire life,” Hoffarth said.

Hoffarth found her way by getting involved with the political science scene at UW-Madison. She’s currently the civic chair of the Political Science Students Association and she also sits on the Big Ten Voting Challenge Student Committee. Over the summer, she interned with the Wisconsin Primary Health Care Association. Hoffarth’s interest lies in lobbying and government relations of nonprofits more than partisan politics.

UW-Madison tends to draw many people interested in political science since it is conveniently situated in the state’s capital city. Going to school here and working in the political environment has allowed Hoffarth to network and make good connections with those who share the same endeavors as her.

“The energy is just really different, engaging with people in this space no matter what position your organization that you’re involved in is just different and it feels more immediate,” Hoffarth said. “This would be a great time to be a transfer student because everybody is super active and just trying to get their names out there and letting you know what their clubs are doing.”