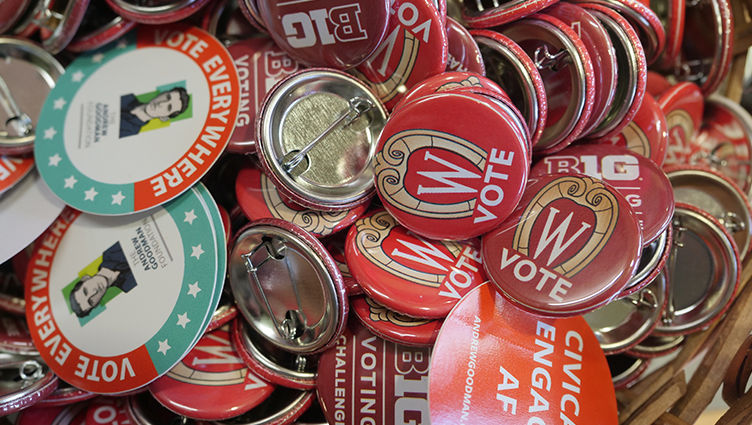 UW-Madison students turned out in force for the midterm elections Tuesday, culminating a year-long voter-turnout competition with other Big Ten schools.

The winners of the Big Ten Voting Challenge won’t be known until August 2019, but it generated a lot of excitement and civic involvement.

The challenge is a nonpartisan effort that aimed to mobilize registration and turnout at all 14 Big Ten universities. Trophies will go to the universities with the highest voter turnout and the most improved turnout in the Nov. 6 election. At UW–Madison, efforts included registration drives, discussion panels, a debate and chalking on Election Day.  Dozens of student put in hundreds of volunteer hours.

In the 2014 midterm election, 35.5 percent of UW–Madison students voted, or a total of 12,333, according to a report from the National Study of Learning, Voting and Engagement.

To obtain 2018 campus-by-campus results, all 50 states audit their election results and those results are merged with student information, scrubbed to protect individual privacy, and provided to Tufts University which will produce campus NSLVE reports, probably in August 2019.

Overall voter turnout in Madison was extremely strong, according to preliminary reports from the City Clerk’s office.

In the meantime, the campuses will be share their experiences during the First Big Ten Voting Challenge and will plan for 2020.

Organizers of the challenge hope this is just the beginning, and that more students get civically involved through groups such as the Morgridge Center for Public Service, ASM student government or the Wisconsin Union Directorate Society and Politics.