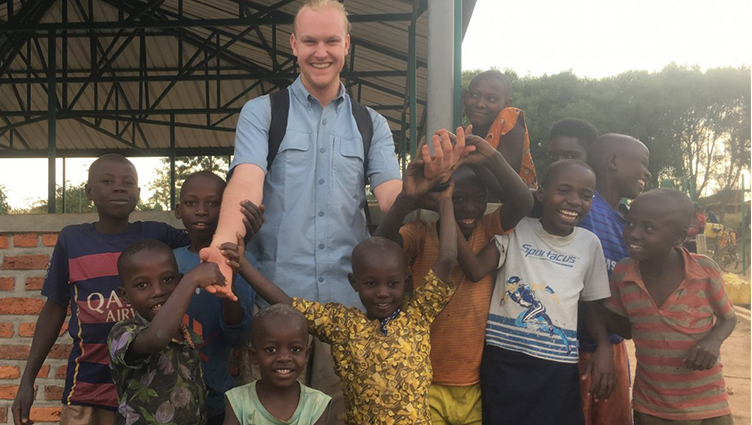 It’s easy to make a difference through an award that’s named after the Wisconsin Idea, and Jacob Olson is doing just that. The biochemistry and environmental studies major traveled to Rwanda this past summer through a Morgridge Center for Public Service Wisconsin Idea Fellowship that helped him combine his education with public service and community engagement.

The fellowships award undergraduates up to $7,000 to address an issue in a local or global community. Olson’s project was titled “Service-Learning on a Lion Reintroduction Program at Akagera National Park, Rwanda.”

In Rwanda, scientists from UW–Madison and elsewhere study how the reintroduction of lions creates a cascade of effects in the environment. Olson is part of a team led by professor Adrian Treves from the UW–Madison Nelson Institute for Environmental Studies and geography professor Lisa Naughton, along with collaborators in the United States and in Rwanda. Olson says his combination of biochemistry and environmental studies gives him a great background to tackle the issue.

“Combining these two majors has really given me a great mindset, I think,” says the Mt. Horeb, Wis. native. “My Freshman Interest Group (FIG) titled Wolves, Dogs, and People with Adrian really opened my eyes to the diversity of environmental studies. And then I always knew I wanted to do something in the lab and that’s what led me to biochemistry. For our work with the park, I got to be both in the field and doing some analysis so I really enjoyed it.”

The team is trying to get to the bottom of exactly what the effects of the lion reintroduction are in and around Akagera National Park. Through community engagement they are working to learn from community members exactly what issues they might be facing outside the park. The team focused on livestock loss and high-risk areas around the park.

Olson spent six of his seven weeks in Rwanda working on different parts of the project. He spent a lot of time walking around the outside of the park with a translator asking the local people about their experiences with hyenas. He was curious if they’ve received compensation from the government for livestock killed by wildlife or if they have defensive measures against wildlife such as corrals and fences. Their data could help the locals prevent their livestock from being killed.

“It was so interesting to learn more about their culture throughout the interviews and I also wanted to learn some of the language,” he explains. “A lot of people said they love seeing wildlife because they appreciate their beauty but at the same time need to protect their livestock. It was important to get their perspective.”

As a senior graduating in May 2019, Olson plans to continue to combine his two passions for the environment and lab-based biochemistry research. He is exploring graduate school in the area of biofuels.

“It would be great to explore an environmentally sound project and combine that with plant biochemistry,” he says. “Field work is very different than laboratory work but I’d love to have a hand in both. As a young person, I want to make a difference and I believe this is a way to do it. Even more broadly I think that work done in the laboratory can lead to changes in our broader environment and on the societal and cultural level.”