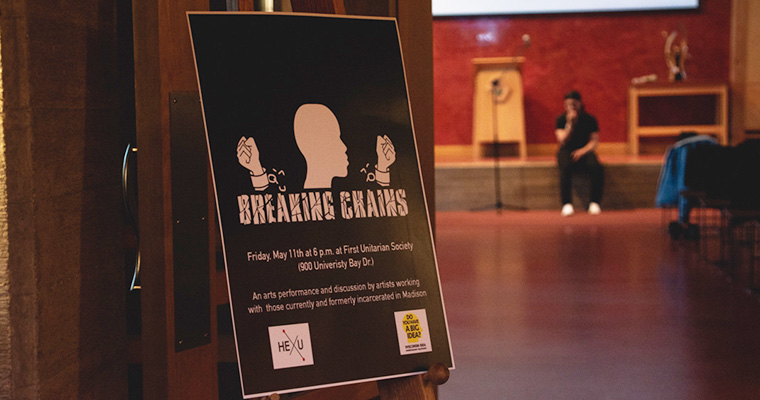 UW-Madison can often times feel like a bubble, but for UW-Madison alumni Mackenzie Berry, she was ready for it — all of it.

“One of my main intentions coming into undergrad was to see how resources can be redistributed from the university to the community, because I feel like UW often feels like a bubble,” Berry says.

Addressing Incarceration and Its Effects on Community Health Through the Arts

Berry didn’t shy away from opportunities while at UW-Madison. The more she was out in the community, the more she became alarmed at the inequities that existed in Wisconsin. Her research with the YWCA Racial Justice Summit on high incarceration rates of black men gave her motivation to address a clear community issue.

“I didn’t want to propose my own project,” Berry says. “I really wanted to work with the partner organization MOSES to respond to a need that they saw.”

Prior to applying for the fellowship, Berry and Wilson had already been working with MOSES and the YWCA mass incarceration project. The relationship that both of them cultivated over the course of their time with MOSES made it easy for her to follow up with them on a consistent basis.

After receiving the fellowship, Berry met with Wilson and representatives from MOSES to brainstorm on how they could develop a stronger mutually beneficial relationship and how that was going to look.

Berry invited First Wave students to work with project participants, incarcerated and formerly incarcerated, to express their experiences through the arts, monologue and poetry.

“I wanted to bring First Wave students from campus to the community to work with people and build a bridge between the campus and community, even if it was on a small note,” Berry says.

Each group the First Wave students worked with had autonomy over the activities they did. For example, the students would work with the men to create songs or video footage that were a reflection and interpretation of their experience.

Listen to First Wave student Lucien Parker’s “Pride and Joy,” based on the stories and experienced the men shared.

The culmination of Berry’s project resulted in a multimedia art showcase, in which the students would perform their projects that they had worked on with the men. The men’s stories were later transcribed in a booklet with visual artwork for them to keep.

Partnership Between the University and Community

Berry emphasizes that being outside of the university space and witnessing events happening outside of students’ comfort zone is crucial to understanding inequities around them.

“For me, I just wanted to see how I can assist in MOSES’ mission to end incarceration in Wisconsin with my skills and knowledge in the arts,” Berry says.

According to Berry, being a WIF recipient is more than making an impact. Students who apply for a fellowship have to be invested in their community partner.

When reflecting on her WIF project, Berry hopes that future fellowship recipients will choose a community organization that they believe in and create long-lasting relationships with one another.

“WIF is a model of creating a partnership between the university and community organization,” Berry says. “That’s something I’ve taken with me past undergrad.”