There was a time when UW–Madison junior Tina Marshalek hesitated to tell people she was a non-traditional transfer student. Or that she had been homeschooled from kindergarten through 12th grade.

She didn’t want people judging her based on preconceptions, and she was a little unsure herself what to make of her background. But the wariness fell away as she gained confidence in her abilities. 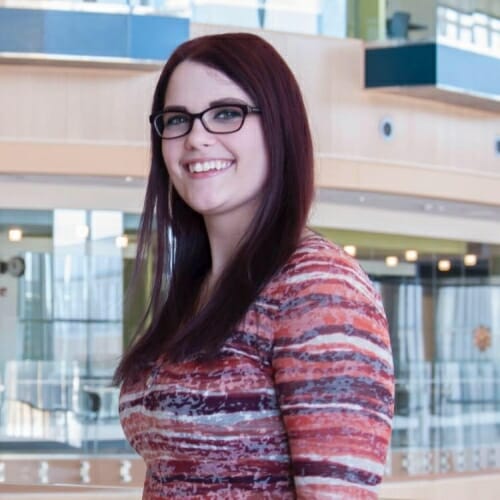 “I came to realize that these differences have been an asset to me,” she says. “They’ve helped me cultivate where to go and who to be.”

Marshalek’s atypical academic path has led to a very elevated place. She has been named a Truman Scholar, one of the most prestigious undergraduate honors in the country.

Created by Congress in 1975, the Harry S. Truman Scholarship Foundation honors the late president by working to select and support the next generation of public service leaders. Marshalek is one of 62 national winners this year. She will receive a $30,000 scholarship toward graduate school and the opportunity to participate in professional development programming.

Marshalek learned she’d won from UW–Madison Chancellor Rebecca Blank, who popped up as a surprise guest on a video conference call between Marshalek and the staff of the Office of Undergraduate Academic Awards.

“I’m here to offer you congratulations because we have just learned that you’re a Truman Scholarship winner,” announced Blank.

“How did you find out before anyone else?” responded a stunned Marshalek, laughing. “It’s great news. Oh my gosh, thanks for telling me. What the heck?”

Blank said she loves to deliver such wonderful news to students — and never more so than during these difficult times when COVID-19 has upended society.

“This is really a great honor and a sign of everything you’ve accomplished both here at UW and your work before that,” Blank told Marshalek.

Marshalek grew up in Maryland and was homeschooled there through 12th grade before moving to Ashland, Wisconsin. After high school, she took jobs at restaurants and a local newspaper while also working on the political campaigns of Democratic candidates, both as a volunteer and a paid staff member. She enjoyed public service and decided college was the next step, but the application process intimidated her.  Neither of her parents are college graduates, and she knew little about higher education.

“I’d only ever learned by myself,” Marshalek says. “I didn’t know if I was even equipped to be at college. I was 20 years old and had never taken an in-person class.”

Accepted to Madison College, she eased into it, taking only nine credit hours her first semester, most of them online. She found she loved college, especially all the opportunities it offered. She was elected student body president and championed issues important to her fellow students, like textbook affordability and food security.

In January 2019, Marshalek transferred to UW–Madison, where her tuition and fees are covered by Bucky’s Tuition Promise. She also is supported by the Center for Educational Opportunity (CeO), which works to create equal opportunities in higher education by providing robust advising, mentoring and other services to students who are first-generation, meet federal income guidelines, and/or have a documented disability.

Marshalek is majoring in community and non-profit leadership and political science, with a certificate in educational policy studies. She continues to be active in student government and volunteer work and currently serves as the UW South Madison Partnership intern for the Morgridge Center for Public Service.

“Being homeschooled and low-income, I did sometimes believe what others said about me, and my self-confidence took a hit. Fortunately, I’ve been very lucky to have key teachers and mentors in my life.”
Tina Marshalek

After graduating in May 2021, Marshalek plans to pursue a master of public affairs with a concentration in educational policy at the La Follette School of Public Affairs at UW–Madison. She aspires to specialize in the area of homeschooling, both to highlight its strengths and to rectify what she views as its shortcomings.

“I want to improve the experience for future generations, which is why I’ve become an advocate for greater government oversight of homeschooling in the U.S.,” says Marshalek, who now considers Madison her home. “The issue doesn’t receive a lot of visibility, and there’s so much research yet to be done.”

Michael Maguire, a faculty associate with the UW–Madison School of Human Ecology who has taught Marshalek in several classes, says Marshalek has a unique perspective on her own and other people’s educations, informed by her experiences with homeschooling.

“As a self-described ‘self-taught’ student, her initiative is remarkable,” he says.

Asked what other students might take from her story, Marshalek quickly responds, “Don’t listen to the people who put you down.”

“Being homeschooled and low-income, I did sometimes believe what others said about me, and my self-confidence took a hit,” she says. “Fortunately, I’ve been very lucky to have key teachers and mentors in my life. Without them, I wouldn’t have applied to college or run for student body president or applied for the Truman Scholarship. You have to find your allies and see your own potential.”

Other recent Truman Scholars from UW–Madison include Shiloah Coley (2019), Jordan Madden (2018) and Deshawn McKinney (2016). A complete list can be found here.