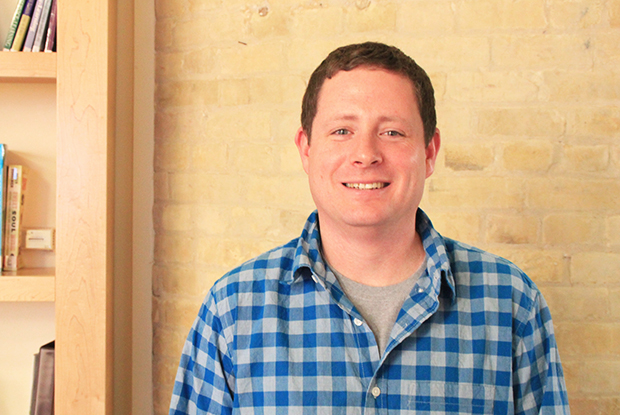 Brian Squire considers himself a lucky man. For the last 20 years, he’s found his passion in working with Madison youth inside and outside of schools, building social and academic skills with a constant focus on how to close the achievement gap.

But if not for a service learning class at UW-Madison, his life might have turned out much differently.

Rehab Psychology and Special Education 300 has been a popular service learning course at UW-Madison for decades. In 1996, as a sophomore, Squire enrolled in the class, then taught by Professor Anne Donnellan.

“Part of it was because I was diagnosed with ADHD and I knew that was going to be a topic. Part of it was that I heard it was a really easy A,” Squire says with a laugh. “I will completely admit that.”

But by the time the class ended, Squire found something more meaningful than a grade.

Beyond standard classroom time, Squire and his RPSE 300 classmates were required to complete 25 hours volunteering with a community partner. Squire chose to work with Wisconsin Youth Company in their afterschool program at Thoreau Elementary.

It was there that Squire discovered how much he enjoyed working in the afterschool education setting building skills beyond just test taking.

“If you aren’t ready to be at school socially and emotionally, you won’t be able to succeed academically,” explains Squire.

In fact, Squire liked working with Wisconsin Youth Company so much—and they thought he was so good at what he did—that they kept him on over the summer once the class ended. Soon after, they hired him on full time.

Today, Squire works at the Lussier Community Education Center on Madison’s west side where he serves as the Elementary Program Manager supervising programming for K-5 students.

Lussier’s elementary afterschool program serves 34 students, 100% who are students of color and almost all who qualify for free or reduced lunch. The free program has a lengthy waitlist.

To run the program, which focuses on supporting both academic and social/emotional needs, Squire relies on volunteers—including a number of UW-Madison students every semester.

Last fall, Badger Volunteers sent its first team of students to Lussier, with another team returning this spring. Service learning students from UW-Madison courses have also been working with the community center for years.

“I wasn’t really aware of how much a bubble I was in when I was in the bubble,” Squire says of being a UW-Madison student. “So that’s why I like working to get students out of that bubble and out into the community.”

Megan Bertsche, a senior from Manitowoc, WI, has been working with the elementary program at Lussier through Badger Volunteers since last fall.

Squire says it’s important for students to get off campus and gain new perspectives and challenge their assumptions.

“And that’s the great part about what Badger Volunteers does and what service learning does,” Squire says. “It allows students to put themselves in those uncomfortable positions and to challenge themselves.”

For Bertsche, she says its so valuable to have Squire serve as an example for current UW-Madison students.

“I think it’s wonderful for me and my fellow UW volunteers to see Brain as such an advocate for all the elementary students at the center,” says Bertsche, adding that her time at Lussier has made her even more excited for her future career as an audiologist.

“In my field, I’m constantly running into folks who are in their jobs because they went through a service learning class at UW-Madison,” says Squire. “I run into those folks all the time. And it’s kind of hilarious. We have a little fraternity amongst ourselves of like, ‘Oh yeah, so which class was it for you?’”

Squire says his advice to the service learning students and volunteers he now mentors is to pour their hearts into it.

And along the way, Squire and the many others who share stories like his, will be there to guide the next generation of UW-Madison students.

“I consider it a big responsibility of mine because people did that for me—I had those folks and they helped me get to where I am now,” says Squire. “And now it’s my responsibility to do that for the next generation of people so that hopefully they keep passing that along.”